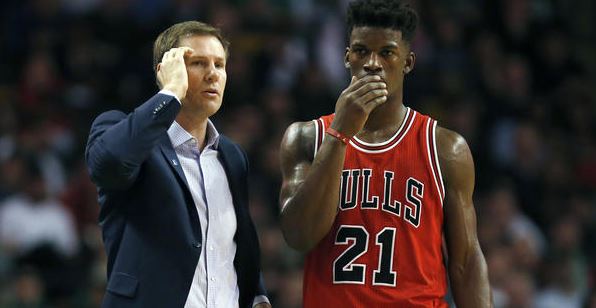 After an embarrassing loss to the New York Knicks this past weekend, All-Star guard Jimmy Butler had some harsh words for his head coach. The Bulls, standing at 15-10, have struggled in adjusting to Fred Hoiberg’s style after five seasons under former coach Tom Thibodeau.

Hoiberg has a much calmer demeanor and style than Thibodeau, who ran a tighter ship than most around the league. Thibodeau earned a 255-139 record in five seasons, but was fired at the end of the 2014-15 season due to a broken relationship with the Bulls’ front office.

Thus far, Hoiberg’s new approach has not been the answer either though. In his defense, it is his first NBA coaching gig, and it will take some time to adjust. However, it doesn’t help boost Hoiberg’s confidence when his team’s star player is going to the media to complain.

“I believe in the guys in this locker room, yeah,” Butler said. “But I also believe that we probably have to be coached a lot harder at times. I’m sorry, I know Fred’s a laid-back guy, and I really respect him for that, but when guys aren’t doing what they’re supposed to do, you got to get on guys, myself included.”

Butler’s words foreshadow that the Chicago Bulls’ “revolution” is not yet complete. Although a new coach is at the helm, there are still a variety of problems haunting the organization.

It has been a disappointing start for a team with championship aspirations, as the Bulls’ organization finds themselves in limbo. Reversing course on the Hoiberg hiring would be disastrous, but so would trading the best two-way shooting guard in the NBA.

Since Hoiberg won’t be transforming into Thibodeau any time soon, a drastic move by the Chicago Bulls appears inevitable.