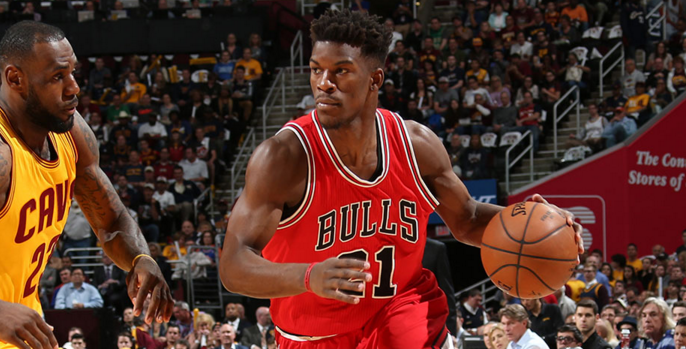 Jimmy Butler dropped 53 points Thursday night. Granted, it was against the Sixers and took overtime, and Derrick Rose and Pau Gasol didn’t play, but it was an impressive performance nonetheless. He shot 15-30 from the field, 21-25 from the line, and added ten boards and six assists in 49 minutes. Most importantly, though, Jimmy reminded us that he is increasingly becoming Chicago’s franchise player.

So far this season, Butler is having a career year, averaging 23.1 PPG with 46/34/83 splits and a PER of 22.51. Rose, on the other hand, has been one of the least efficient players in the NBA with a post-Achilles Kobe-esque PER of 11.2 in nearly 33 minutes per game. Clearly, at this stage in their careers, Butler is the superior talent and bigger difference-maker on the court (especially factoring in his defense).

If and when the Bulls organization (and the fans) acknowledge that Butler is the guy to build around will be a fascinating subplot going forward. Based on their ball-dominant styles and constant rumors of personalities clashing, a Butler-Rose backcourt seems tenuous at best. With the looming free agency of Pau Gasol (seeking a multi-year deal) and aging of Joakim Noah, GM Gar Forman will have plenty of tough decisions needing to be made about the direction of this roster.

Whether any team out there wants Rose, or if the Bulls are willing to shop him yet, is unclear, but on Thursday night, ‘Jimmy Buckets’ may have made it a little easier for Forman to pick up the phone.