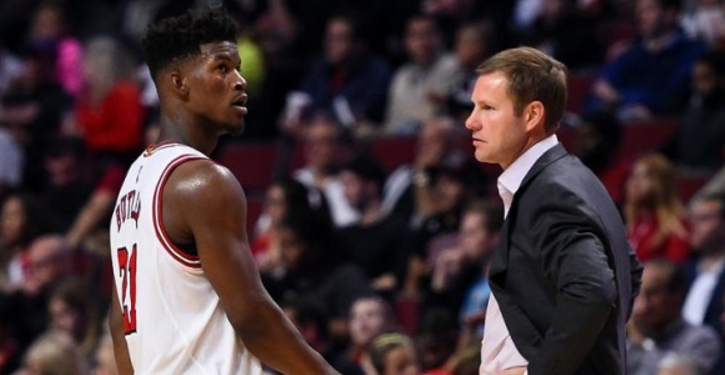 Despite scoring a career-high 36 points against the Boston Celtics at TD Garden, Jimmy Butler was extremely unhappy. With the Bulls in the midst of a three-game losing streak, Butler was angry with his coach for ignoring his plea to stay in the game.

Fourth quarters have not been kind to the Bulls recently, as they have allowed their opponents to score 30+ points in the final period in each of their past three losses. Chicago’s loss at Boston wasn’t as painful as their blown 16-point fourth quarter lead against the Phoenix Suns, but it’s never good when a team’s star player turns to the media to criticize the coach.

The hiring of Fred Hoiberg was supposed to elevate Chicago to an elite offensive team, but the Bulls have actually dropped in offensive efficiency from No. 11 under Tom Thibodeau last season to No. 27 this year. Luckily, the defensive principles Thibodeau instilled have stuck with the team, as Chicago currently ranks fourth in defensive efficiency. Viewed by many as Cleveland’s biggest competition for Eastern Conference supremacy, Chicago has plenty to figure out if they are to make a deep playoff run.

And that starts with the coach and the face of the franchise getting on the same page.