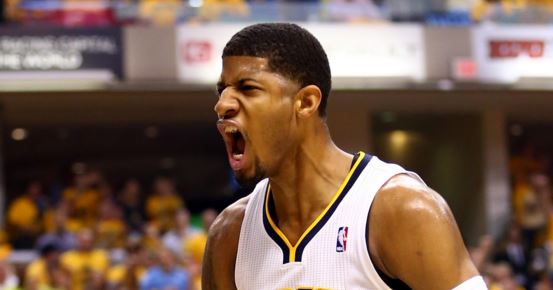 After suffering a gruesome leg injury in a Team USA scrimmage last year, there were questions about whether Indiana Pacers star, Paul George, could regain his dominant form.

Seven games into the season, George has quickly put those doubts to rest.

The player we watched go toe-to-toe with LeBron James in the Eastern Conference Finals in 2013 and 2014 is back, and as good as ever.

As Stephen Curry stole all of the headlines after one of the most spectacular opening weeks in recent memory, Paul George quietly had himself the best weekend of any player in the association. In two games, George totaled 68 points, 23 rebounds and nine assists, while shooting 52 percent from the field.

The Pacers went 1-1 through the stretch, winning a tight contest over the Miami Heat and losing a hard-fought game against the Cleveland Cavaliers. Squaring off against Dwyane Wade and LeBron James, George looked like the best player on the court in both match-ups.

Not bad for a guy that had major leg surgery a little over a year ago.

George’s ability to play without fear of re-injuring himself has been inspiring to watch (take notes, Kobe and Rose). His defense is already back to All-Defensive team caliber, and his jump shot is as smooth as ever.

This comes as great news for the Indiana Pacers – a small-market franchise that typically lacks appeal. With George locked up through the 2018-2019 season, his ability to stay healthy will be crucial to his trade value.

Because come on, at 25 years-old and in the peak of his career, there’s no way George is going to play his entire career in Indiana. Enjoy his brilliance while you can Pacers fans, because in the next few years, the only George on the roster will be George Hill.