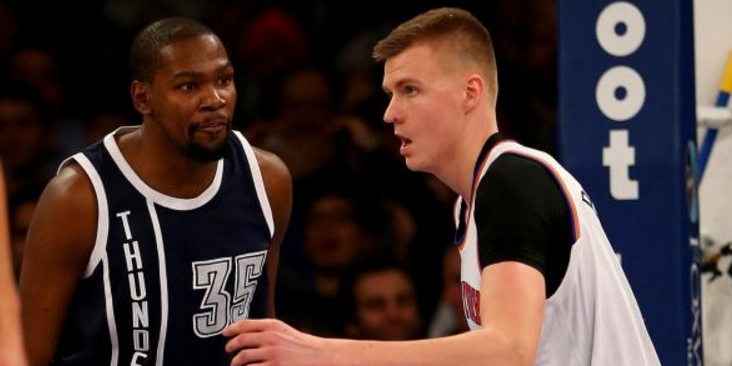 The Oklahoma City Thunder are thriving this season with Kevin Durant and Russell Westbrook at the helm. But imagine if the team with a 44-21 record had New York Knicks sensation Kristaps Porzingis to go along with their star-studded duo? Well, that almost happened in 2014.

According to an ESPN report, the Thunder promised the 20-year old Latvian that they would select him in the draft two years ago. At the time, the 7-foot-3 talent was only 18 years-old and was considered a top 10 pick if he was to wait until the next draft.

The “Unicorn” ended up withdrawing his name from the 2014 draft, and in 2015, he was selected in the first round with the fourth overall pick. Now, the Knicks rookie is tearing up the NBA, averaging 14.0 points, 7.2 rebounds and 1.9 blocks per game.

His breakout season makes one wonder how dominant the Thunder would have been with the addition of Porzingis. A lineup of Westbrook, Durant, Porzingis and Serge Ibaka is one that would actually rival the Golden State Warriors.

Even though the Latvian has only played about 60 NBA games, he is already drawing high praise from players and coaches around the league.

Thunder coach Billy Donovan discussed Porzingis: “He’s really different. The one thing I give him credit for as a young guy in this being his first year, he comes across with a great level of confidence and belief in himself. He obviously stretches the floor, he shoots it from behind the 3, he can put it on the floor. He’s really a unique player and I think he’s going to be an unbelievable player in this league.”

If the Thunder’s promise in 2014 came to fruition, Oklahoma City could be well on their way to their first NBA championship.