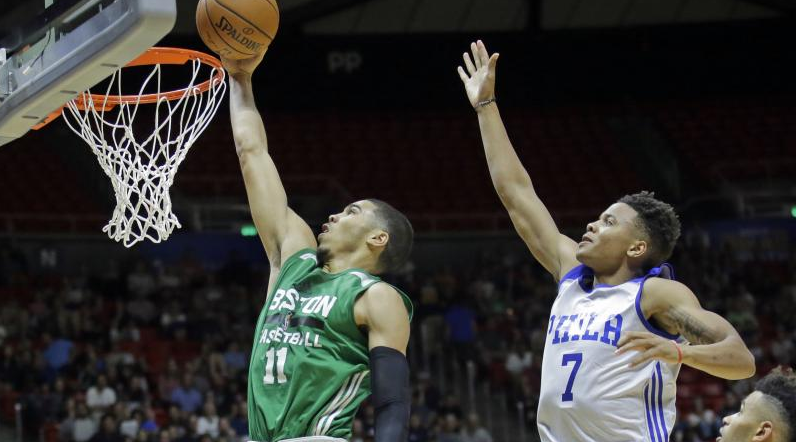 Sports have become a year-round spectacle. This idea is clearly apparent when looking at the NBA. Less than a month ago, the Warriors hoisted their second title in three seasons, and seeing Markelle Fultz and Lonzo Ball get drafted legitimately feels like yesterday. With the rapid-fire free agent signings keeping fans glued to social media during the offseason, it’s understandable if you didn’t realize the NBA Summer League kicked off earlier this week. Summer League essentially serves as a time for lottery picks to get their first taste of NBA basketball while undrafted rookies and castaway veterans try to make a lasting impression. Let’s take a look at some of the bigger stories of the Summer League thus far.

Kennard has been exactly what the Pistons could have hoped thus far. He’s shot the ball tremendously from the perimeter and has shown creativity off the bounce. The former Blue Devil had a breakout game on Independence Day, sinking three clutch free throws in a double overtime victory over the Miami Heat. Kennard wasn’t quite done with his late game heroics though, hitting this deep three versus the Mavericks to force Thursday’s game into overtime:

Although Isaac has played sparingly, the sixth overall pick has flashed immense upside. This 30-second sequence has to make Magic fans feel good about their pick:

Another big standout from the lottery has been the Heat’s Bam Adebayo. Miami’s athletic big man has showed promise through his three games thus far – averaging 19.0 PPG, 10.0 RPG and 2.3 BPG. It was a bit puzzling when Miami selected Bam with the 14th overall pick, knowing that his skillset ran similar to Hassan Whiteside’s. Only time will tell how these two play together, but Bam has actually flashed some playmaking ability that would lend one to believe it could work.

Looking further in the draft, Charlotte’s second-round pick Dwayne Bacon has played himself into a guaranteed contract. Bacon was rewarded with a 3-year deal after posting a 29-point performance to close out the Hornets’ schedule.

A couple of other veterans to watch for in Orlando are Detroit’s Henry Ellenson, OKC’s Josh Huestis, Dallas’ Brandon Paul and Miami’s Okaro White.

Ellenson is the type of stretch-4 teams look for in today’s game, able to knock down open shots and use his length on the defensive end. The Thunder already have a group of rangy, athletic defenders (Andre Roberson, Jerami Grant), and look to have snagged another one in the former Stanford Cardinal Huestis. Paul has been shooting lights out from the outside – a skill the Mavericks are in dire need of. White has led the Orlando Summer League in scoring thus far, making it more likely the Heat have him stick around to start the regular season.

For all you college basketball fanatics, the Orlando’s Summer League has also been host to some of the NCAA’s brightest stars over the past few years. Virginia’s London Perrantes, Florida State’s Xavier Rathan-Mayes, Oregon’s Dylan Ennis, Michigan’s Derrick Walton Jr., UCLA’s Isaac Hamilton, Wisconsin’s Nigel Hayes and Baylor’s Johnathan Motley have all made an appearance over the past week after failing to get drafted last month. Each of these players made an impact in March’s NCAA Tournament, and have the talent to continue their basketball careers whether that be on an NBA roster or in the newly dubbed, G League.

Over in Utah, we have a quartet of promising teams with a couple of the biggest names in last month’s draft – most notably Philly’s Fultz and Boston’s Jayson Tatum. Luckily for fans, the pair of top talents matched-up in the first game of the tournament, and it was quite the spectacle. Fultz showcased his plethora of offensive moves, but it was Tatum who had the last laugh as he sunk the game winning shot to lead the C’s to a victory:

Jayson Tatum hits the game-winner against Markelle Fultz and the 76ers. pic.twitter.com/QEbvk771Ov

Keeping with the Celtics, 2016 draft pick Jaylen Brown has looked awfully good in his two appearances. The high flying second-year man had a great outing against the 76ers, posting a double-double (29 points, 13 rebounds) in 30 minutes of play.

Fellow sophomore DeJounte Murray hasn’t experienced the same success. Following an impressive 2017 playoff run, Murray made his Summer League debut by going 0-for-10 from the field in 21 minutes. The Spurs have lofty hopes for their 20-year old point guard, and will likely lean on him heavily if Tony Parker isn’t ready to go by October.

A silver lining for the Spurs has been the stellar play of Murray’s teammate, Bryn Forbes. Forbes was an excellent shooter during his time at Michigan State, and he seems to look much more comfortable firing away this year. His 31-point performance against Boston serves as Danny Green-insurance, just in case the Spurs decide to trade their longtime starting shooting guard.

Closing with one of the most entertaining games of the week, the Jazz edged out the 76ers on Wednesday night on the shoulders of 2014 lottery pick Dante Exum. Exum finished the game with 26 points and 10 assists, doing something he hasn’t done in a regular season game in his career – recording a double-double.

Dante Exum getting UP for the block. Jazz fans have to like what they’ve seen from him today.

It’s rare that a fourth-year player participates in Summer League, as Utah seems to be applying pressure to the young Aussie with George Hill now out of town. After missing the 2015-2016 season due to injury, Exum looks as spry as ever. His decision making seems to have improved, as has his shooting release. He’ll need to become more creative in open space if he ever wants to be an upper-echelon point guard, but this is certainly a step in the right direction. Also, having a mentor like Ricky Rubio certainly can’t hurt in that department. An Exum and Donovan Mitchell (has also been exceptional!) backcourt is a passable consolation prize for losing out on Gordon Hayward.

The Orlando and Utah Summer Leagues will have wrapped up by the end of Thursday night, while the Las Vegas Summer League kicks off on Friday and will extend until the 17th of July.