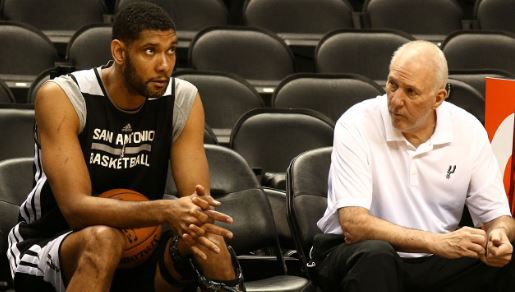 For 19 years, NBA fans witnessed a player-coach bond between Tim Duncan and Gregg Popovich that clearly transcended basketball. During their time together, the two helped lead the San Antonio Spurs to five championships and more than 1,100 wins.

While both aren’t fans of interacting with the media, Popovich had no problem sharing with reporters what Duncan meant to both he and the Spurs franchise:

Heading into the 2016-2017 season, it will be the second time in Popovich’s legendary career that he coaches a team without Duncan on the roster. The first time was the 1996-1997 season, when San Antonio went 20-62 en route to winning the No. 1 pick in the 1997 Draft (where they selected Duncan).

However, Popovich’s results should be much better this time around, as Duncan leaves behind a nucleus that includes Tony Parker, Manu Ginobili, Kawhi Leonard, LaMarcus Aldridge and Pau Gasol.

And while the Spurs’ on-court product of ball movement, spacing and suffocating defense will look nearly identical, no longer getting to witness the iconic Popovich-Duncan interactions means San Antonio will never be the same.