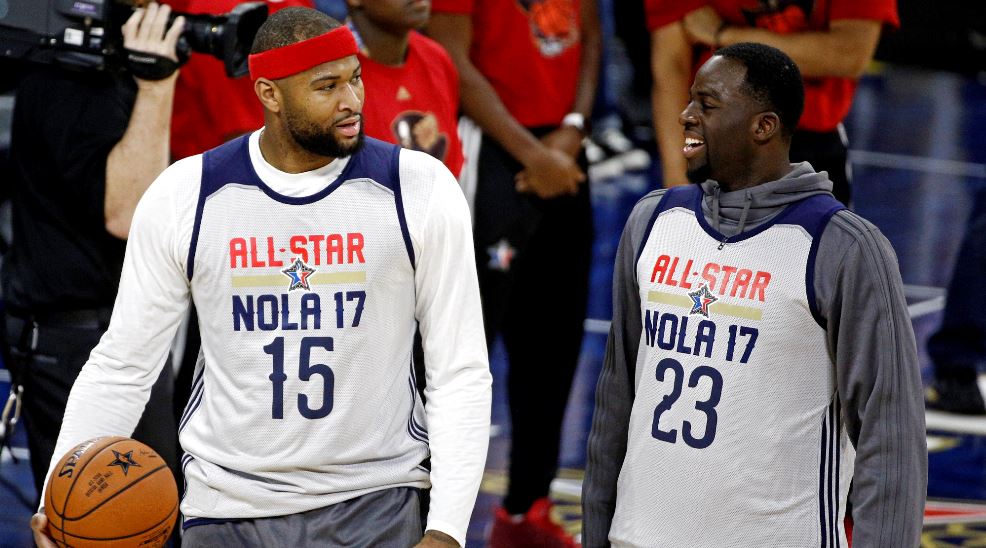 How about the Patriots?

The 5th most talented player on any team is important, but not that important. By definition, that player is at least mostly replaceable. There’s no NBA team that can use the excuse after a failed season, “we lost our 5th best player.” Except the Warriors of course. They’re different.

As DeMarcus Cousins gets fitted for his new Golden State Warriors jersey, Draymond Green becomes the 5th most talented Warrior. And when it comes to the skills we usually discuss in basketball like dribbling, shooting, and finishing, he might not even be 5th. I could make a case that Andre Igoudala is more “talented.” But Green is part of this vaunted starting 5, so let’s call him 5th. No other team in professional sports can claim that their 5th best player is also their most important player.

Last May, Kevin Durant scored 38 points in a masterful Game 4 win over the New Orleans Pelicans. It was only round 2, and the defending champs had just been torched by Anthony Davis’ squad by 19 points. That didn’t sit so well with any of the Warriors, but it was Green who stayed up all night watching film, followed by sending a text message to Durant telling him to ignore all the noise, and just be his aggressive self. Two nights later, he was, and the Warriors won by 26.

Green always does those little things, which end up being not so little.

Every year in NBA free agency, there’s at least one surprise. We thought LeBron James was going to LA and he did. Paul George was a mild surprise, but those behind the scenes in NBA circles saw this one coming a couple months ago. But on the night of July 2, we got our shocker. DeMarcus Cousins was joining the Golden State Warriors.

How could this happen? How did this happen? Well, it originated in the same spot the Kevin Durant signing started, Draymond Green’s phone.

Fans, media, even former players, called for change because this star hoarding Warriors roster was just making this all look too easy. Of course, the Warriors laugh at this. It’s never easy, and they don’t care that you think they’re too talented. Draymond Green, especially, doesn’t care.

Cousins credits conversations with GM Bob Meyers, and Head Coach Steve Kerr. He also heard from Durant and Steph Curry. But, by all accounts, this started because of a great relationship between Cousins and Green, two guys who are not viewed in NBA circles like they are by the outside world.

Fans and media see ultra-aggressive, intensely emotional, and potentially combustible personalities. Every source I’ve talked to inside locker rooms see all of this as the same thing. They care. They want to win, badly. And when put in the right situation with the right teammates, they do.

Attracting teammates is where Green has become a master. Four Warriors players, Green, Curry, Igoudala and Klay Thompson, all flew to the Hamptons to lure Durant, but never forget how that recruitment started. Green sent the now famous text from the locker room after the Warriors lost the 2016 NBA Finals in Game 7 to Cleveland. It read, “See what we’re missing. We need you. Make it happen.” It happened. The Warriors haven’t lost since. And no one other than Durant has been NBA Finals MVP since either.

Always sensing that the team needs to evolve and get better, Green started that ball rolling again this offseason, and it led to Cousins. We can have a healthy debate over how this will work, if it will work, is it good for the league, etc. But what can’t be debated is the essence of Draymond Green.

A 2nd round draft pick who made the starting lineup by accident, Green is now essential to the cognitive and emotional stability of the Warriors both on and off the court.

Each of the Warriors’ stars is good at knowing where to be on the court, but only one Warrior knows where every Warrior is supposed to be. That’s Green.

All the Warriors stars say they don’t care who gets the buckets. But only one Warrior is actually making a nightly box score sacrifice that has seen him average less than 10 points per game for his career. That’s Green.

All the Warriors stars have phones. But only one Warrior has used his to land Durant & Cousins. That’s Green.

That’s what Green said to Curry in 2016 when Curry slipped on a wet spot on the Houston floor, twisting a knee that would force him out of multiple playoff games.

It’s always Green. Every famous quote from that locker room is always Green. All the text messages, the words of encouragement, the managing of egos, the shoulder to cry on when things get tough, and the lead recruiter when a new opportunity pops up that no one else saw coming. It’s always Green.

The Warriors are hoping that theory never gets put to the test.