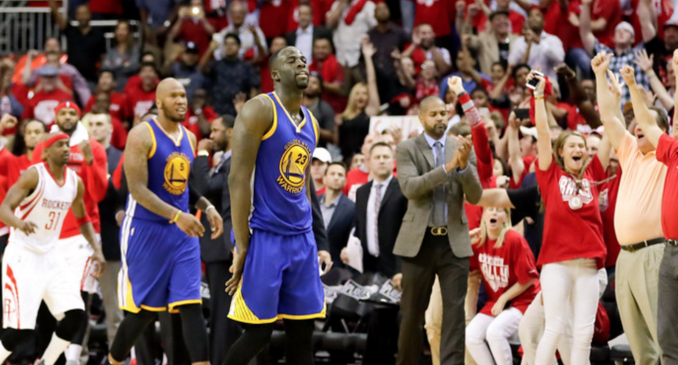 In what was supposed to be a runaway series for the Golden State Warriors, there has certainly been more drama against the Houston Rockets than anyone could have anticipated. Between Stephen Curry’s ankle injury, the chippy play and Golden State’s slim 2-1 lead in the series, plenty of questions now surround the Dubs.

Despite suffering their first loss of the postseason in Game 3, if the NBA could retroactively officiate, the Warriors would be up 3-0 in the series. One day after James Harden hit a game-winner with 2.7 seconds left, the NBA stated Houston’s superstar should have been called for an offensive foul on the play.

Harden was defended by Andre Iguodala and can clearly be seen extending his off-arm on the play:

Regardless, the Rockets now have a chance to tie the series at 2 apiece on their home court while Curry’s availability remains a question mark.

Reports stated Curry wanted to play Game 3, but head coach Steve Kerr elected to remain cautious and let the MVP’s ankle continue to heal. With the Warriors now in danger of a surprisingly long series, it would be surprising for the Baby-Faced Assassin to sit out a third consecutive game.

It’s still a long-shot to even hint at the Warriors getting knocked out in round one, but as we learn every postseason – expect the unexpected.

After humming along the entire regular season en route to an NBA record 73-9 season, the Warriors have already been reminded that there are no guarantees in the playoffs.