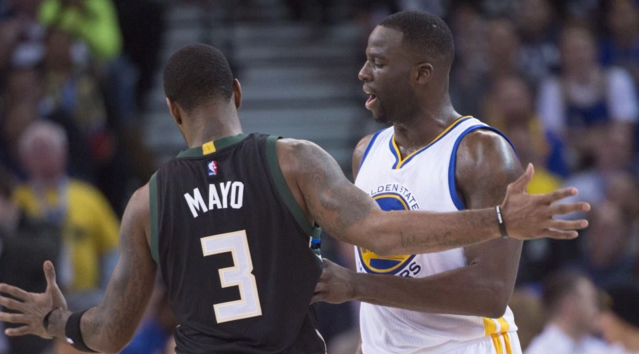 The Golden State Warriors wanted their revenge, and they got it against the Milwaukee Bucks. After being handed their first loss of the season at the BMO Harris Bradley Center on December 12th, the Warriors took great exception to the way Milwaukee handled the win. A Michael Carter-Williams stare down of the Warriors’ bench following a dunk didn’t sit well with the defending NBA champions.

Luckily for Golden State, they only had to wait six days to hand the Bucks their 18th loss of the season. Despite trailing by 11 with nine minutes left, the Warriors went on to win 121-112.

While Golden State was happy to avenge its only loss, the drama didn’t end when the final buzzer rang.

Draymond Green and O.J. Mayo bumped into each other at mid-court, and then went on to exchange words. Both players were coy after the game when discussing the incident, but Golden State’s Swiss-army knife was visibly upset after Mayo touched the back of his head.

The Michigan State alum told reporters after the game, “Just, ain’t no man going to touch my head. I’m a grown man. That’s all I’ve got for you.” Clearly fired up after the emotional win, Green went on to also say that he wasn’t satisfied with the Warriors’ performance.

Most teams would come away happy with a nine point home victory, but the first 27 games have shown the Warriors (26-1) aren’t most teams. Golden State will have to settle for a season split with the Bucks, but as they chase a second consecutive championship, there is one team they definitely won’t be facing in the NBA Finals – the Milwaukee Bucks.

That’s way better than any stare down possibly could be.