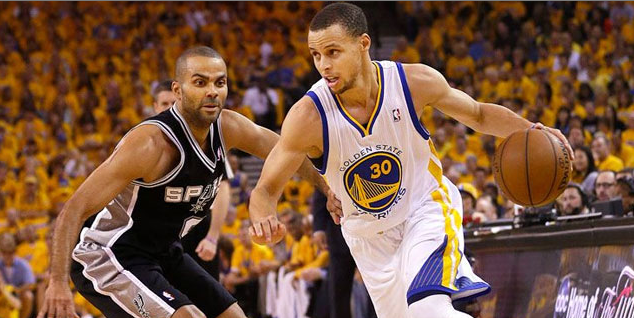 The NBA world excitedly tuned in for the Golden State Warriors-San Antonio Spurs showdown Monday night, but unfortunately for fans, it didn’t yield the competitive result most people were hoping for. In a lackluster game by the Spurs, the Warriors clearly asserted their dominance in the Western Conference, routing San Antonio 120-90.

Curry was utterly spectacular against the Spurs, doing absolutely whatever he wanted on his way to scoring 37 points in 28 minutes. The Spurs tried a variety of different options on the league MVP – from Tony Parker to Jonathan Simmons to Kawhi Leonard, the reigning Defensive Player of the Year– and Curry toasted all of them. It was another mesmerizing performance by Curry, helping solidify his place as the frontrunner in this season’s MVP race.

For as great as Curry and the Warriors played, the Spurs were also a shell of their usual selves. “I was bad,” LaMarcus Aldridge told reporters in Oakland. “They scramble so much, I was in a rush, I was kind of eager out there. I’ll learn from it, and I’ll be better.”

Spurs head coach Gregg Popovich also weighed in with his typical sarcastic opinion: “I’m just glad my general manager wasn’t in the locker room, because it might have gotten me fired.” It was a direct shot at Cavs general manager David Griffin’s decision to dismiss head coach David Blatt. While Popovich was obviously joking, he went on to finish the media session with arguably his best line of all time, saying, “We almost had em.”

We learned a lot Monday night in Oakland. Not only are the Golden State Warriors far better than the Spurs, but they are clearly in the driver’s seat for another NBA title. If they weren’t already, the other 29 teams should be very, very afraid.