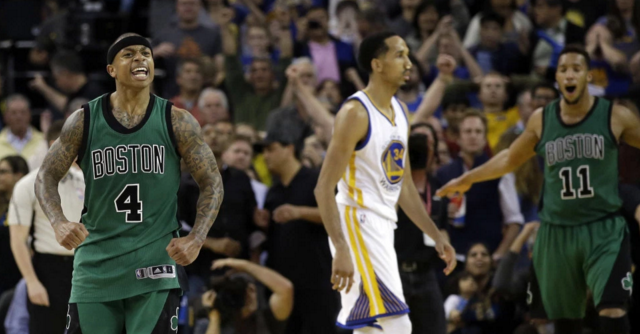 It’s not an April Fools’ Day joke. The Warriors’ historic streak has ended at 54 games.

On Friday night, for the first time in 55 games, the Golden State Warriors lost a regular season game in Oracle Arena. The Boston Celtics eked out a 109-106 victory behind balanced scoring and a defense that forced the Warriors into 22 turnovers. For Golden State (68-8), the loss complicates their chase toward 73 wins, as they will need to finish 5-1 or better down the stretch to break history.

It was an impressive performance by Boston, led by Isaiah Thomas, Evan Turner, Jared Sullinger and Avery Bradley who combined for 78 points. The Celtics were the aggressors all night, getting to the free throw line 17 more times than the Warriors.

Even with Golden State’s sluggish play, their 20 three-pointers kept them in the game. Curry hit eight of them and finished with 29 points, 6 assists and 5 rebounds, but his 9 turnovers proved costly.

Following the game, Golden State’s head coach, Steve Kerr, didn’t make any excuses. “We got beat. Boston deserved to win and they won.”

While Golden State was clearly outplayed, the Warriors were missing a few of their key performers. Andre Iguodala and Festus Ezeli were both out with injuries but are both expected to be ready for the postseason. Forward Draymond Green stepped up in their absence, posting 16 points, 9 rebounds, 7 assists and 6 steals.

Despite the loss, Golden State remains in the driver’s seat to break the record. With games against Portland, Minnesota, and two games each against Memphis and San Antonio, the Warriors should still make history.

However, Friday night was simply a reminder that there’s no arena where Golden State is unstoppable.