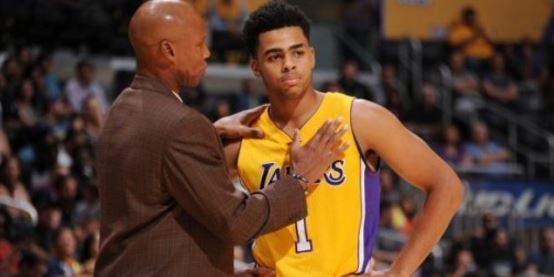 The Los Angeles Lakers’ season has turned into a full-fledged soap opera as the team faces its latest crisis. Coveted rookie, D’Angelo Russell, has reportedly caused a fissure in the locker room reminiscent of the San Andreas Fault.

A video, which is believed to have surfaced in the past week, shows Russell recording a private conversation with teammate Nick Young, who is unaware of Russell’s decision to record the conversation. During the taped conversation, Young appears to admit to seeing a woman whom is not rapper Iggy Azalea, his fiancé.

According to sources, the incident has led teammates to ‘isolate’ Russell in the locker room. At a recent breakfast meeting, sources said, no Laker would sit with the prized rookie, and in a separate incident, guard Lou Williams removed himself from the room when Russell sat next to him.

A Lakers team source told ESPN.com’s Ramona Shelburne, “It’s about as bad as it can get. There were trust issues already. Now there’s no trust.”

Russell, seen by the Lakers as being a future star, has been scrutinized for his maturity by coach Byron Scott as recently as February.

Following a 48-point trouncing in Utah, sources have credited the lack of effort to the problems in the locker room stemming from this latest incident. Neither Young nor Russell has released statements on the matter, but TMZ reported early Wednesday that Young and Azalea’s relationship is “hanging by a thread.”

While the belief is that Russell did not leak the video, the sentiment in the locker room remains one of disdain. In a season already on track to be the worst in franchise history, the anointed star of the future, Russell, has taken the attention away from Bryant’s home stretch, and simultaneously created another giant headache for the Lakers.