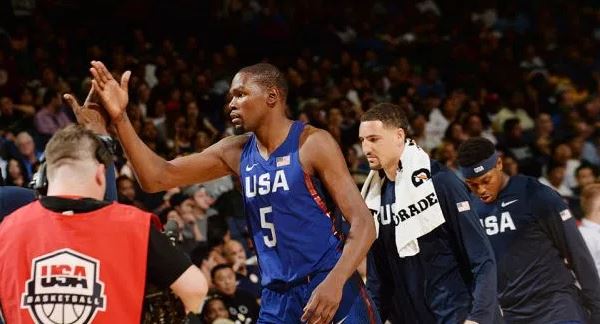 When Kevin Durant announced he would be leaving the Oklahoma City Thunder for the Golden State Warriors, many believed we wouldn’t see him play in front of his new home crowd until October. To the surprise of many, fans only had to wait three weeks, as Oracle Arena hosted Team USA’s exhibition game against China Tuesday night.

Durant admitted to having some nerves before tip-off, but no one would’ve been able to tell based on his performance. The 6-foot-9 sharpshooter drilled a three-pointer six seconds into the game, giving the United States the lead for good. On the next possession, Durant threw down an emphatic dunk, and went on to score 13 points on 8 shots in just over 19 minutes of action.

USA went on to win the game 107-57 in a laugher, and offered plenty of highlight-worthy plays. However, the most notable moment came courtesy of DeMar DeRozan, who almost completed an in-game dunk that would’ve brought the house down:

While Team USA was all smiles both during and after the game, head coach Mike Krzyzewski was less than pleased. The longtime Duke coach expressed concern the team “had a little bit too much fun out there” and that they need to “tone [it] down a little bit.”

From a sportsmanship standpoint, Coach K’s criticism seems like a fair one, as Team USA seemed more interested in celebrations and running up the score than improving as a unit. With Team USA already up by 48 points, you can see how annoyed Coach K is at the bench’s reaction to Klay Thompson’s three-pointer:
https://vine.co/v/5KJijJ7F6I7

With so much talent and such high expectations in Olympic competition, Coach K just wants to make sure his guys remain focused heading to Rio. As long as he continues to hold them accountable, there’s no reason to think Team USA will return with anything short of gold.