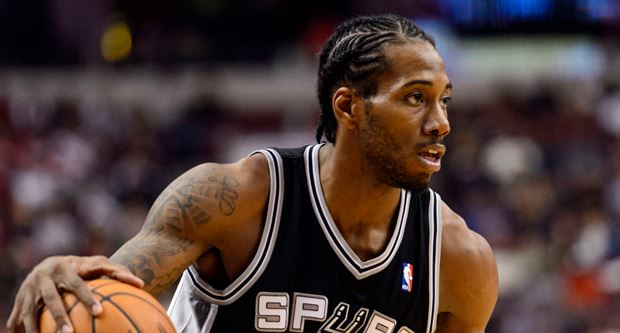 Retooling for the 20th straight season, the San Antonio Spurs are still the biggest threat to Dub Nation in the Western Conference. By adding a new superstar (LaMarcus Aldridge) to their already stacked front court, the Spurs continue to be the New England Patriots of the NBA.

Gregg Popovich and Bill Belichick might actually be the same human being, and Tim Duncan and Tom Brady have been the unquestioned leaders of their respective franchises for the past 15 years. However, the comparisons get a bit murkier when we take a look at the enigmatic Kawhi Leonard. Is he Rob Gronkowski? Jamie Collins? Julian Edelman?

The answer is none of the above. The best two-way player in the NBA is too reserved to be like Gronk, too impactful on offense to be a defensive player, and too athletically gifted to be Edelman.

Let’s take a look at the ever-improving Kawhi Leonard over the past three seasons:

Winner of the Finals MVP in 2014, Leonard became the third player in NBA history to win the award at 22 years-old (or younger). He also added a Defensive Player of the Year Award to his trophy case last year, becoming the first wing to claim the honor since Ron Artest in 2004. It certainly isn’t a bad two-year stretch for a player many don’t even think of when the San Antonio Spurs are mentioned.

With San Antonio racing out to a 10-3 start, Kawhi Leonard has been the biggest reason why. Establishing himself as the franchise’s new cornerstone, Leonard’s ability to lock down the opposing team’s best player and lead the Spurs in scoring will dictate their postseason success.

If Stephen Curry ever cools down, watch out, because Leonard will have an extremely compelling case for MVP this season.