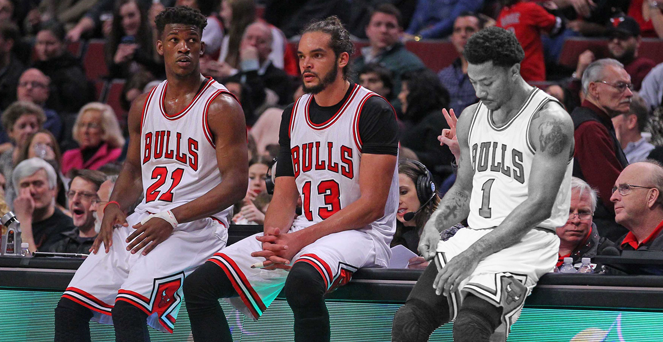 The Derrick Rose era is over.

It was fun while it lasted. The freakish speed bursts and agility, accompanied by the unparalleled body control and explosive leaping ability were a sight to see when Rose reigned as one of the basketball world’s elite. As marketable and likeable as they come, Rose was a breath of fresh air – a humble, soft-spoken superstar in a sport that is normally dominated by the unabashed and overconfident.

A well-documented list of injuries has forced Rose to play a bit more cautiously, and his weaknesses as a player have never been more evident than they are this season. His 37 percent shooting from the field is bad, and his 17 percent clip from beyond the arc only makes things worse. It’s not good when your numbers rival a 37-year old, one-legged Kobe.

With a solid 9-4 start to the season, the Bulls have found other ways to win games as their “star” has struggled. But have no fear Bulls fans, as one Chicago star is crumbling, another is blossoming before your very eyes.

Jimmy Butler has (as expected) thrived in new coach Fred Hoiberg’s “pace and space” scheme, and has unceremoniously snatched the torch from Rose’s hands as the star player in Chi-Town. The NBA world already knew how fierce of a defender Butler was, but his ability to create his own shot evolves with each game he plays.

In a league that’s thin at the 2-guard position, and with multiple players performing well below expectations, it’s not nearly as outrageous as it was three months ago to say Jimmy Butler is the best shooting guard in the league. James Harden is absolutely fantastic, and a rough shooting stretch doesn’t change that, but after Harden, the list goes downhill fast. Saying Butler is superior to Klay Thompson, DeMar DeRozan, and an aging-but-still somehow really, really good Dwyane Wade isn’t too farfetched.

Butler is an absolute stud either way, and the Bulls have a legitimate chance to emerge from the Eastern Conference with him as their lead guy.

Rose may never be the player he once was, but Bulls fans can rest a bit easier knowing that Jimmy Butler and a cast of solid supporting pieces are there to carry Chicago to another playoff run. If the Bulls want any chance of beating the Eastern elite, it will take Rose accepting a complementary role, and helping the budding superstar in Butler anyway he can.