In the era of on-demand streaming, commercials can often times get lost in the shuffle. The yearly tradition of discussing your favorite Super Bowl ads isn’t part of the water cooler culture the same way that it was even 10 years ago. I’m not a fan of this shift in media consumption — especially when it comes to television commercials. Back in my day, we had to sit through commercials just to make sure we didn’t miss anything. Sure, hundreds of them were flat-out awful and repetitive, but every once in a while you’d get a memorable ad that stuck with you for years. Everybody has a jingle or a line from a particular commercial in their childhood that they still remember or recite to this day.

The NBA has been especially stellar with their constant stream of ads. The sport has almost always had a treasure trove of stars to plop into various campaigns. No professional sport (soccer comes closest) markets their stars better than basketball. There have been thousands of memorable ads over the years, and here just a few that are worth of making it to the Commercial Hall of Fame.

Having played in the Eastern Conference for the entierety of their respective careers, the NBA world was never treated to a Jordan/Bird finals match-up. However, they did do battle once upon a time with a major prize on the line — MJ’s Big Mac.

The duo go back-and-forth attempting to one-up each other. It begins with a few familiar trick shots — behind the basket, top of the key three-pointer, baby hook from 10-feet — as it slowly escalates into the greatest game of H.O.R.S.E. ever played.

This is peak 90’s — from the Saved By the Bell-esque background music, to Bird’s signature behind-the-ear release, to Jordan’s ridiculous outfit.

Sorry Uncle Drew, your shtick has been done once before.

Charlotte Hornet and New York Knick legend Larry Johnson sported a wig and pearls to transform into his alter ego, “Grandmama”. The advertisements were for the shoe company that sponsored Johnson, Converse, but like many great commercials in the past the advertising aspect is an afterthought.

Much like the feature film Uncle Drew, Grandmama also transcended into other forms of media following the initial run of ads. Johnson played the role in an episode of Family Matters, teaming up with Steve Urkel for a 2-on-2 basketball tournament.

Best Use of Puppets — Kobe and LeBron, Nike

Nike is no stranger to the puppeteer game. Penny Hardaway became a household name thanks to Lil’ Penny (voiced by Chris Rock). They hit the jackpot two decades later when they Muppetized the games two brightest stars.

LeBron (Keenan Thompson) and Kobe (David Alan Grier) are depicted as roommates that certainly know how to get on each other’s nerves. Both players defining personality traits are well illustrated — the first episode shows The King with child-like exuberance while the calculated and seasoned Black Mamba patiently puts up with his antics.

It’s believed that Nike put together the series of ads in hopes of a James/Bryant clash in the 2010 NBA Finals. The pair have individually been a part of 16 of the last 19 NBA Finals, and never once played each other. Unfortunate for both Nike and NBA fans.

Hip hop and basketball just work well together. We’ve known this since the dawn of YouTube player highlights from back in the early 00’s. Nike brought the two worlds together, using a Juelz Santana track to endorse the company’s new generation of stars.

Yes, the birds left the nest
I’m all grown up, I gotta fly with the rest
Best of the best, is what we strive to be
A legacy is what we tryin’ to leave
Let’s say good-bye to the past
The future’s here, at last
The second coming, the new beginning
The truth is speaking, you should listen

That opening verse makes you think that Juelz had to have written the song purely for this commercial. It perfectly coincides with the message Nike is trying to send.

The year is 2008. The stars of yesteryear — Jordan, Bird, Magic, Barkley, Hakeem — are gone. In their place is a new breed, eager to etch their names in the record books along side the game’s all-time greats.

Among the featured players there are 15 NBA Championships, 7 MVP’s, 31 All-NBA First Teamers, and 85 (!) All-Star appearances. It’s safe to say the NBA has been, and always will be, in good hands.

Set to a poem written by Tupac, Powerade’s Just a Kid promo is both gut-wrenching and uplifting.

Knowing Rose’s career path, it’s almost difficult to watch without getting a little sentimental. A career that once looked so bright was crushed by countless injuries and mental fatigue. The former Chicago Bull will likely end up as the only NBA MVP not to be enshrined in the Basketball Hall of Fame.

However, the message still holds true. Rose was just another kid born in a rough patch of Chicago. He made something of himself, and despite suffering massive setbacks, he’s still making a career for himself in the league, and is having a bit of a renaissance in Minnesota.

Although it wasn’t in a position he likely imagined a few years ago, the fact that Rose kept going is commendable.

A faithful contingent of Jordan fans remain steadfast in their belief that he has no equal. So instead of pitting Jordan against other lesser players, why not pit him against himself? It makes sense. The only player that could guard Jordan, is Jordan.

The short clip of gameplay is perfectly done. Young Bull Jordan terrorizes the rim with a freakish level of bounce and an inhuman first step. Washington MJ uses his veteran tricks to slow down the youngster, throwing him off with up-fakes, turnarounds and hand checks. Having Gatorade emulate sweat adds some much needed color to an otherwise dark setting.

The commercial is completely surreal. To this day I’m not entirely sure how it all worked, but both young versions of Jordan are perfect representations of their real-life counterparts.

BONUS: It’s only fitting that the only player that stands a chance at challenging Jordan’s crown as the game’s best ever also multiplied himself once before. James is priceless as Grandpa LeBron in this one.

Best Use of a Bench Warmer — Predrag Drogbjak, Sonics

*With a special guest appearance from the pride of Florida A&M University, Jerome James, and Predrag’s lovable cat, Jinkies.

Most Likely To Give You Goosebumps — NBA Forever, TNT

Absolute perfection in commercial form. TNT’s NBA wing has always been on-point with their hype videos. The music choice is perfect, and the dim lighting apropos for the intimacy. Meshing together the stars of that era with players from the past was a nice touch, as the production value is clearly outstanding.

It’s fun, moving, and encapsulates just about everything we love about sports. 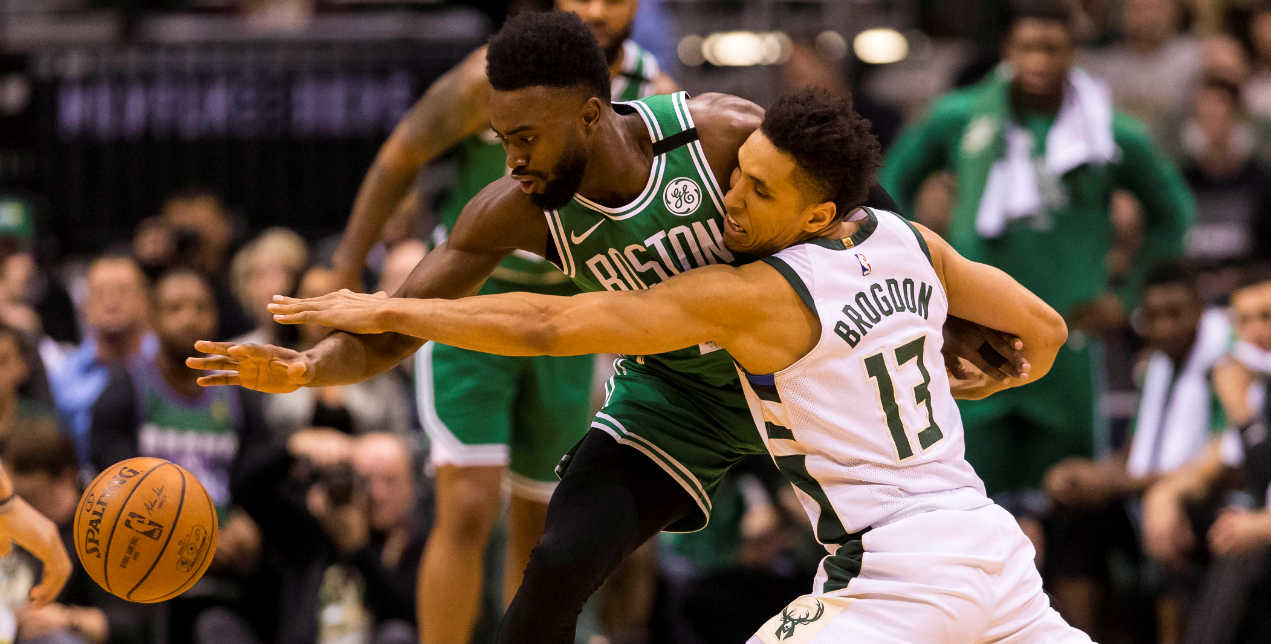