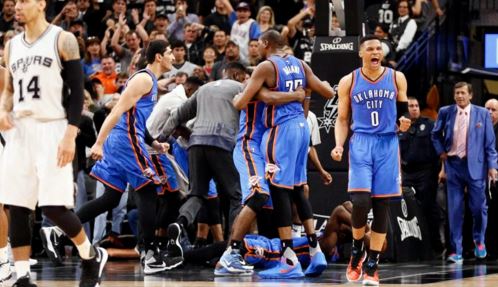 For only the second time in 45 games, the San Antonio Spurs lost in front of their home crowd during the 2015-2016 NBA season. After going a nearly perfect 40-1 at home in the regular season, the Spurs began the postseason 3-0 at home before losing 98-97 to the Oklahoma City Thunder on Monday night.

Oklahoma City managed to avenge a 32-point loss in Game 1, but the victory didn’t come without controversy:

One day later, the league has already ruled Dion Waiters (the inbounder) should’ve been called for an offensive foul after he elbowed Manu Ginobili in the chest. Despite the ruling though, it doesn’t change the fact the Thunder miraculously escaped with the win.

It was a gritty performance by an Oklahoma City squad that hasn’t shied from NBA title aspirations. After getting blown out in Game 1, many were quick to say (myself included) that they were simply overmatched by an elite Spurs squad.

Game 2 was a completely different Oklahoma City squad though. The Thunder shot an efficient 48.1 percent from the field and were led (as usual) by Russell Westbrook and Kevin Durant. The superstar duo combined for 57 points on 22-for-44 from the floor, which was a dramatic improvement from Game 1’s 30 points on 11-for-34 clip.

Oklahoma City’s defense also clamped down, holding the Spurs to 42.6 percent from the field after allowing them to shoot 60.7 percent in Game 1. The Thunder will need a similar effort on the defensive end the rest of the series, as the Spurs are simply too good to slack off against.

While San Antonio remains the prohibitive favorite to advance from this series, Oklahoma City sent a strong message that this series is going to be an absolute war.