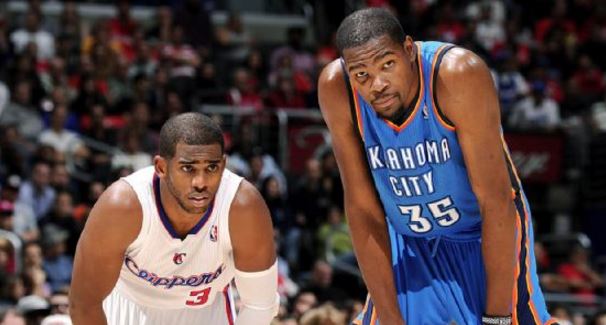 Only hours away from the “Kevin Durant Sweepstakes” officially getting underway, new details regarding each team’s pitch to the superstar are beginning to emerge. And even though the Oklahoma City Thunder remain the prohibitive favorites to re-sign the former MVP, it’s clear the Golden State Warriors, San Antonio Spurs, Miami Heat, Boston Celtics and Los Angeles Clippers won’t be going down without a fight.

All six organizations are set to meet with Durant and his representatives within the next 72 hours to try and convince the 6-foot-9 swingman that their franchise gives him the best opportunity to further his legacy. And while the pitches may start to get a bit redundant for Durant, sources indicate the Clippers’ offer to Durant will be far from what most expected.

Many believed the Clippers would need to trade either Chris Paul, Blake Griffin or DeAndre Jordan to make room for Durant’s salary, but that no longer appears to be the case. Instead, Los Angeles plans to pitch Durant on the concept of creating a “Big 4” that would undoubtedly form the strongest starting lineup in the NBA.

The move would certainly be easier said than done though, as the Clippers would need to clear a ton of cap space to add Durant. Aside from trading J.J. Redick and his hefty salary, Los Angeles would also need to renounce the rights to their free agents (Jamal Crawford, Austin Rivers and Jeff Green).

It would be a difficult process, but head coach Doc Rivers’ invitation to Paul, Griffin and Jordan to join the pitch meeting suggests the Clippers’ seriousness in making the “Big 4” possible.

The decision ultimately comes down to Kevin Durant, but you can’t fault the Clippers for doing everything in their power to acquire the once-in-a-generation superstar.