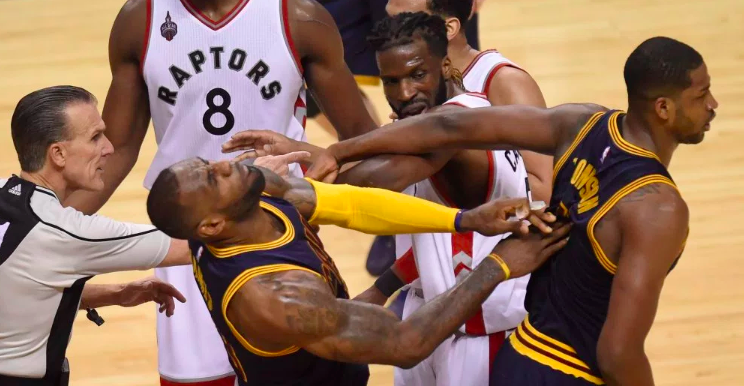 The 2000-2001 Los Angeles Lakers remain the only team in postseason history to win their first 11 games. The Cleveland Cavaliers, winners of 10 straight, had their streak halted by the Toronto Raptors Saturday night.

Trailing 2-0 in the series, it was a must-win game for Toronto, who had been outscored by a combined 50 points in Games 1 and 2. The Raptors responded though, consistently beating Cleveland to loose balls and earning a 54-40 rebounding advantage.

All-Star shooting guard DeMar DeRozan led the way with 32 points while going 12-for-24 from the field, and received plenty of help from his teammates. Point guard Kyle Lowry poured in 20 points, the second unit added 30 and center Bismack Biyombo gobbled up a career-high 26 rebounds.

Despite the well-balanced attack on offense, it was Toronto’s defense that secured the victory. Cleveland shot an abysmal 14-for-41 from beyond the arc, and was unable to find its groove due to Toronto’s smothering defense.

Kyrie Irving and Kevin Love went a combined 4-of-28 from the field for 16 points – an unacceptable stat line for two of Cleveland’s three most important players. LeBron James led Cleveland with 24 points, while also adding 8 rebounds and 5 assists. However, his night didn’t come without a bit of controversy:

After LeBron’s flop, a replay determined it was actually his teammate, Tristan Thompson, who smacked him across the face. With the originally assessed technical foul revoked, the Toronto crowd roared with applause.

It was that kind of night for Cleveland, and with the series now 2-1, the Eastern Conference Finals is finally a competitive one.