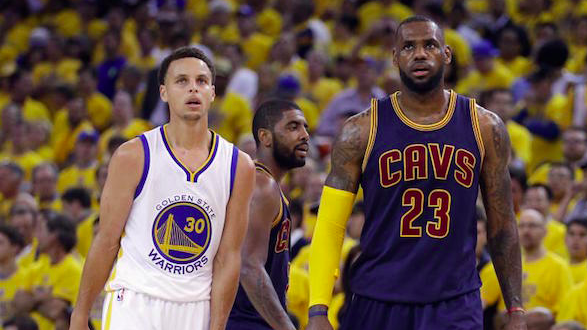 After revving the engine for two months, the NBA truly kicks into gear on Christmas Day. And while this season’s slate of games under the tree might not be quite as satisfying, that one big gift will always make up for a few disappointments. Fortunately for us, LeBron and the Cavs will be spending this Christmas at the Warriors’ house. Here are a few things to know before opening up this joyous stocking of basketball:

State of both teams: Finally, we get our long-overdue matchup between these teams at full strength. Golden State, as usual, has no major injuries, rendering their 26-1 record utterly lucky, (according to some league sources). It’s much rarer, though, for the Cavs to be this intact. With Kyrie Irving and Iman Shumpert back, and a comfortable lead atop the East, good vibes seem to be permeating their locker room—a vast difference from a year ago.

Basketball thing to watch: It will be telling to see how David Blatt decides to approach the Dubs’ hyper-effective small-ball lineup. Their crunch-time five of Stephen Curry, Klay Thompson, Andre Iguodala, Harrison Barnes, and Draymond Green ranks second in net points of any lineup in the league, despite logging nearly 500(!) fewer minutes than the top squad (Detroit’s KCP-Drummond-Jackson-Ilyasova-Morris lineup).

The Cavs can go two ways with this. They can match small, of course (which most teams try and fail to do), and feature LeBron at the 4. But, I’ll be looking to see if Blatt goes further and sticks LeBron at center for any extended period of time. Or, Cleveland could go ultra-big and put LeBron at the 3, aim to dominate the glass, while affording LeBron some time to guard Steph. The league (particularly the Spurs) will be paying close attention.

Actual thing to watch: In the end, this is a showcase for basketball’s biggest stars, especially for the casual fan hoping to relax on the couch with some eggnog and hoops. After an MVP, NBA title, and 26-1 start, Steph has become the biggest star in the game—surpassing LeBron in jersey sales, All-Star votes, daughter popularity, and, most importantly, the current label of best player on Earth. I’m just guessing that as one of the most aware, conscientious, and competitive athletes in modern history, LeBron has an opinion on that.

The only thing on my Christmas list: buckets. And these guys know how to deliver the goods.
Happy Hoops!