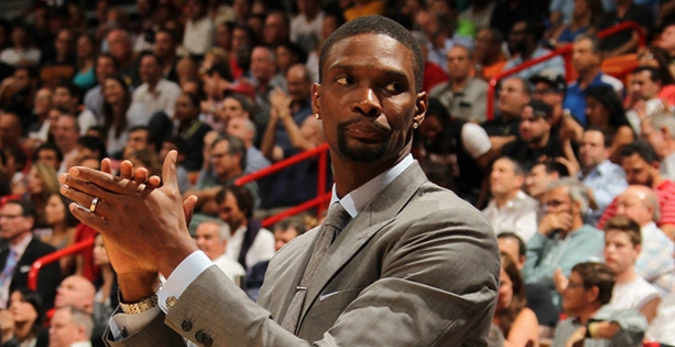 Chris Bosh is making it clear he wants to be back on the court with the Miami Heat, but there remains no estimate on when that might happen.

Bosh was on the Heat‘s bench in street clothes for tonight’s game against Denver, which is the first time he has been in public view at the arena since going down with an unspecified injury a month ago.

Bosh hasn’t played since February 9, but Miami has managed to go 10-4 while holding on to the No. 4 seed in the Eastern Conference during that stretch. They currently sit a half game back of the Boston Celtics for the No. 3 seed.

Even though Miami has played well in his absence, it’s clear the Heat are desperately hoping their leading scorer can make a return to the court this season. As Dwyane Wade pointed out though, just having him back on the bench during games is extremely valuable.

“It was cool to see him back out there,” Wade said. “We didn’t know he was coming out until he came out. It was a surprise for everybody. We trust his IQ, so when he comes to the bench, he’s telling us some of the things he sees.”

This is the second consecutive season Bosh has had to deal with health issues, as last year was cut short due to a blood clot in his calf that traveled to his lung. However, Bosh has remained optimistic through it all:

“I know there have been many questions regarding my health and when I will play again. My situation this year has never been life-threatening. I am feeling great and currently I do not have deep vein thrombosis, I will continue to support my teammates in every way possible. I remain positive that I will be able to return this season. I truly appreciate everyone’s concern and support.”

With Miami poised for a showdown against the Cleveland Cavaliers in the second round of the Eastern Conference playoffs, we have to hope all three “Heatles” (LeBron, Wade, Bosh) will get to square off in that one.