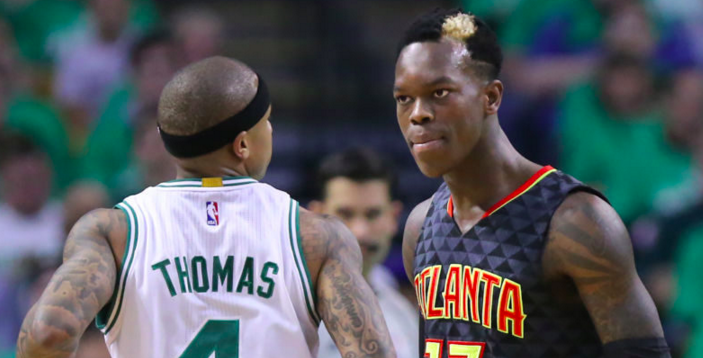 Much to the delight of the Boston faithful, Celtics guard Isaiah Thomas will not be suspended for his actions involving Dennis Schroder in the Celtics’ Game 3 victory over the Atlanta Hawks.

The incident in question occurred during the first quarter, in which Thomas slapped Schroder in the head. The feisty Hawks point guard took exception to the slap, and chirping between the two guards ensued:

Both were assessed technical fouls, and the league felt like a one-game suspension of Thomas was unwarranted.

The news comes with a great sense of relief for the Celtics, as Thomas missing a pivotal game to even the series would surely damper Boston’s chances in this series. With the season on the line in Game 3, the Celtics’ All-Star posted his best performance of the year, stringing up a season-best 42 points against the stingy Atlanta defense.

Thomas is responsible for a large portion of the Celtics’ offense, and with the team already missing the services of Avery Bradley, Boston will need all hands on deck to overcome an Atlanta team that has a bit more firepower. Thomas knows this, and will have to refrain from putting himself in these situations in the future.

Schroder has been a super-sub for this Hawks squad all year, and will also have to avoid any form of retaliation for the remainder of the series.

With the series ramping up and tempers flaring, this matchup looks to be one of the few that will be competitive.