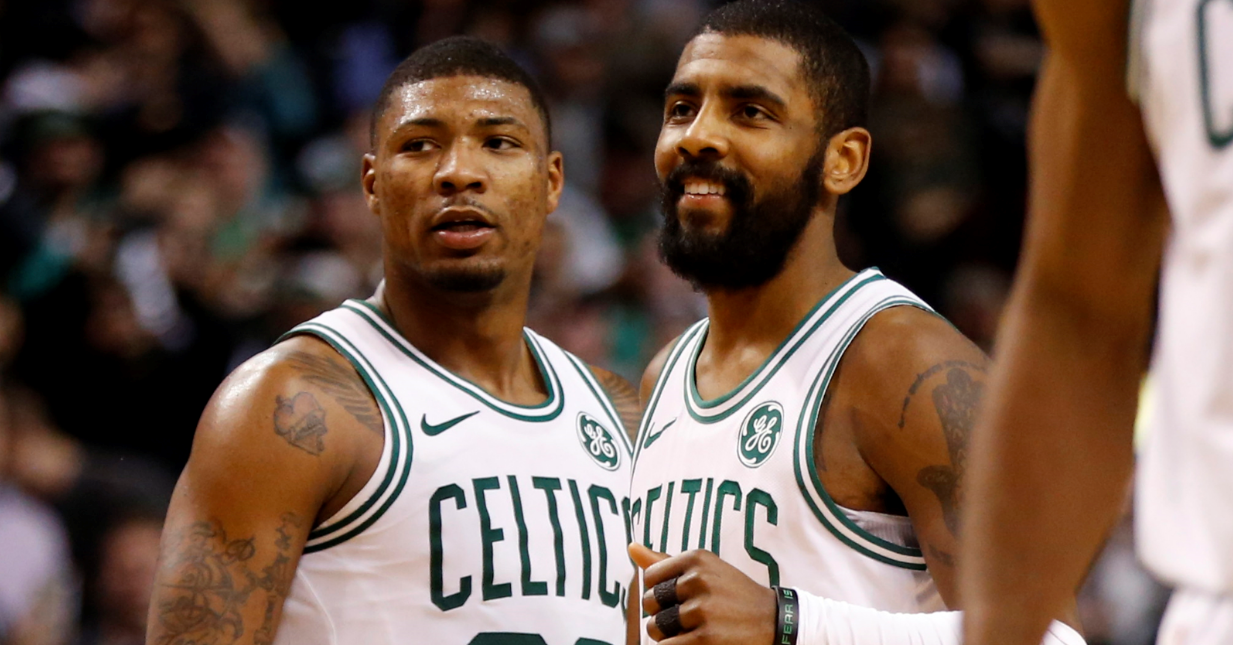 The Celtics and Rockets entered Thursday night with two of the three best records in the league, but each team had hit a bit of a rough patch. Both clubs were hoping to get back on track with a big victory.

Houston jumped out early – as they often do. They raced out to a 12-0 lead, and ended up hitting 10 threes in the first half. A Nenê dunk to start the third quarter gave Houston their biggest lead of the game at 26 points. After that, Brad Stevens’ team showcased why they are still the top-seeded team in the Eastern Conference.

Boston ramped up the defensive intensity, and Kyrie Irving began settling in on the offensive end. The hot-shooting Rockets made just four threes after the break, as the Celtics held them to 36 second half points. The closing minutes of the game featured a heated back-and-forth battle between the two clubs’ best players in Irving and James Harden. However, the plays everybody will remember were made by Marcus Smart.

With seven seconds to go, and the Rockets nursing a one-point lead, Harden committed an offensive foul during an in-bounds play. Al Horford knocked down a tough hook shot on the ensuing play, giving Boston their first and only lead of the game. On the very next in-bounds play, Smart baited Harden yet again and drew a second offensive foul – effectively sealing the game for Boston.

The most Marcus Smart ending you'll ever see. pic.twitter.com/9nt1zDgCQP

It was a most fitting sequence of plays for the stingy Smart. Boston’s defensive ace was all over Houston’s MVP candidate throughout the night. In total, Harden was 0-for-7 with four turnovers on plays in which Smart defended him (per ESPN).

After the game, Harden expressed his displeasure with the officiating. It isn’t the first time (this week) the Beard has been candid of his critiques over refereeing. Smart is a professional irritant, and it’s clear that he successfully got under Harden’s skin on Thursday night.

The close victory was crucial for a Celtics team that recently experienced a stretch of six losses in 11 games. Each of those six losses were against teams that Boston can’t afford to lose to if they want to remain the No. 1 seed in the East. Two were against inferior squads (Bulls and Knicks). Three were against teams missing stars (Spurs without Kawhi, Heat without Dragic or Whiteside, and Jazz without Gobert). And the most recent was a beat down at the hands of their arch-rival, the Washington Wizards.

Boston’s December woes can partially be attributed to their heavy schedule to start the year. The tilt against Houston was the Celtics’ league-leading 39th game of the season. This team is deep, but no team is deep enough to withstand multiple injuries with that type of schedule. Getting Jaylen Brown back will be key, and the return of Marcus Morris was welcomed.

For the Rockets, it’s their fourth straight loss following their blistering 25-4 start. Harden has done everything he can through this stretch – including dropping 51 points in consecutive losses. The common denominator though has been the absence of Chris Paul. They can win without him, but this team is obviously better when Paul takes the floor. Clint Capela helps too. Both could be back as early as the end of this week.

Harden and the rest of the Rockets will have a few months to get ready for a rematch. They host the Celtics in Houston March 3rd.

An Early Look At The Loaded 2018 NBA Free Agent Class