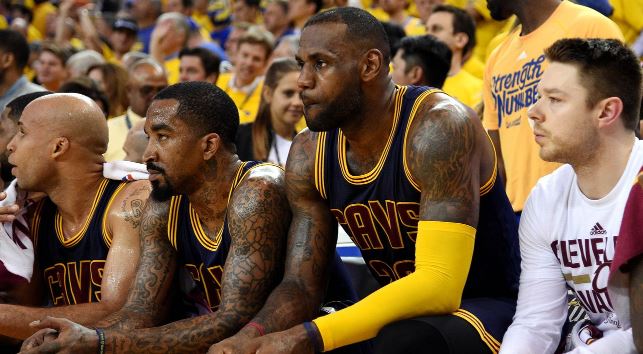 After a disappointing 15-point loss in Game 1, many expected the Cleveland Cavaliers to respond with a much-improved performance in Game 2. Instead, LeBron James and Co. were essentially laughed off the court, as the defending champs defeated the Cavaliers 110-77 to take a commanding 2-0 series lead.

Once again, it was the Warriors’ tremendous depth and stifling defense that proved to be too much for Cleveland. Stephen Curry and Klay Thompson combined for 35 points on 13-for-24 shooting, but it was Draymond Green who ultimately led the Warriors to victory. Green had 28 points, 7 rebounds and 5 assists, and made life difficult for Cleveland’s defense by knocking down five three-pointers.

The Warriors’ crisp ball movement resulted in 26 assists and a 54.3 percent shooting clip from the field, as the Cavaliers simply couldn’t force Golden State into difficult shots. This ran in stark contrast to the other end of the floor, where Cleveland’s offense mustered a total of 15 assists and a 35.4 percent mark from the field.

LeBron was hounded by Andre Iguodala, Klay Thompson and Draymond Green all night, finishing with an uncharacteristically inefficient 19 points on 17 shots and 7 turnovers. James also received little help from his teammates, as Richard Jefferson (12 points) and Kyrie Irving (10 points) were the only other Cavaliers to finish in double figures.

Now heading to Cleveland for Games 3 and 4, the Cavaliers must win four of the next five games if they are to avoid the same fate for a second consecutive season. It will by no means be easy, but with LeBron on the court and three of the five games taking place at Quicken Loans Arena, anything is possible.