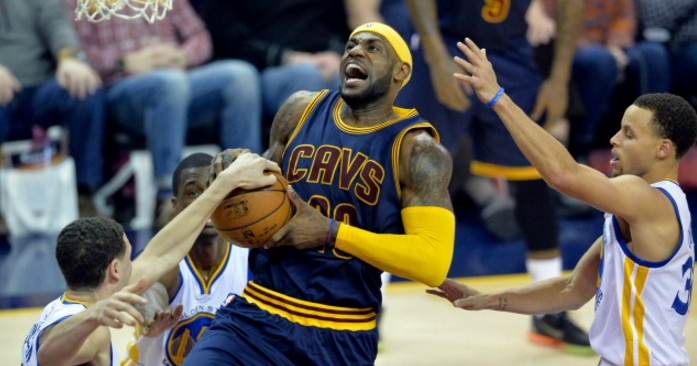 The Golden State Warriors made a statement Monday night, handling the Cleveland Cavaliers with ease en route to a 132-98 victory. The Warriors built a 30-point lead in the first half, pushed their advantage to 43 after halftime, and bounced back from a shocking loss in Detroit over the weekend by winning their fifth straight against Cleveland.

Even ‘The King’ bowed down to Golden State’s prowess after the game. “They did what they wanted,” LeBron James said. “Against the top teams you want to play well and we haven’t done that. We’re 0-3,” James said of Cleveland’s record against Golden State and San Antonio, the West’s top powers. “Tonight was an example of how far we have to go to win a championship.”

Although Cleveland is healthier now than in December, an expected battle between two of the league’s best teams never materialized. This one belonged to Golden State from beginning to end.

A frustrating night for the Cavs bubbled over in the third quarter when J.R. Smith lowered his shoulder and charged into Harrison Barnes, sending the Warriors forward into the hardwood. Smith, who arrived at the arena less than an hour before tip-off, was called for a Flagrant 2 foul and ejected.

Many were disappointed at the Cavaliers’ poor performance, when in reality, the Golden State Warriors are just light-years ahead of them. Their superb ball movement, three-point shooting and nasty defense has the Warriors looking straight ahead for another NBA Championship.

If we learned anything last night, it’s that the Warriors just need to escape the Western Conference for a second consecutive title. There’s no one in the Eastern Conference capable of beating them 4 times in 7 games.