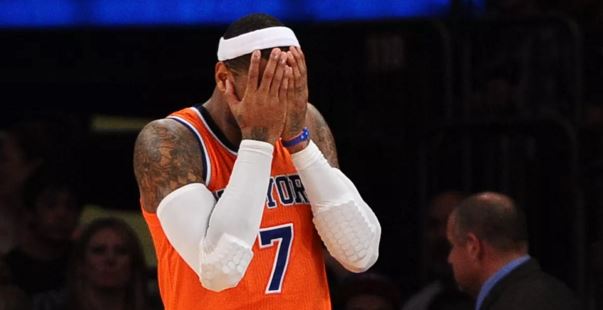 Despite the New York Knicks (25-37) being in an obvious rebuilding mode, fans from the NBA’s most valuable franchise don’t want to hear any excuses for the team’s lackluster play this season.

Things managed to get even worse Tuesday night during a 104-85 defeat at the hands of the Portland Trail Blazers. Late in the game, a heckler kept screaming at forward Carmelo Anthony about how terrible the Knicks are. Melo, angry with the score and the constant jabs, yelled back at the fan with an interesting remark.

“He kept calling my name, calling my name, saying ‘You guys suck, you guys suck,” Anthony said. “At that point, I was trying to gather myself, and I turned around. All I did was point at Dolan and told [the fan], ‘Look, the owner’s right there. Ask for your money back.’ He’s calling me and telling me he’s never coming to another game and we suck. Just don’t want to hear that. I pointed to the owner and told him, ‘You deal with that with him. Maybe you can get your money back.’”

It’s obviously a frustrating situation for the players and the ownership in the midst of another disappointing season. But despite all of this, it’s still not what you want to hear from a star player who’s making almost $25 million this year.

Anthony was involved in trade talks before the deadline — some of which involved him going to the Cleveland Cavaliers. Still in pursuit of that ever-elusive Larry O’Brien Trophy, the 12-year veteran from Syracuse has averaged 21.5 points, 8.0 rebounds and 4.2 assists per game this season.

While fans are upset with the Knicks’ play, the team has a bright future ahead with Kristaps Porzingis at the helm. That process will involve growing pains, and if the Knicks are ever going to move in the right direction, hecklers should be the least of their worries.