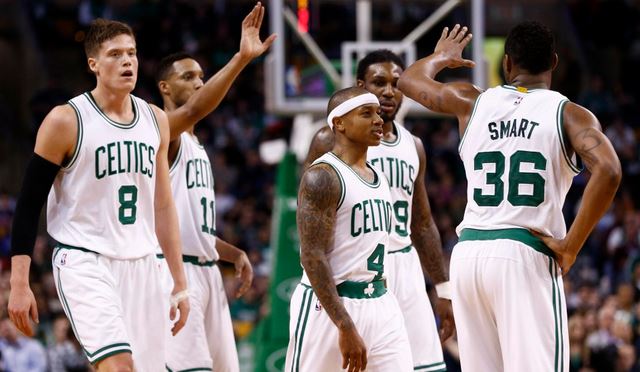 Offseason Recap
Hoarding assets over the past few seasons, the Celtics hope to exit rebuilding mode and return to the top of the league.

Their roster goes three-deep at nearly every position, but they don’t have a single player who would undoubtedly start for the other 29 teams in the league. In fact, their second unit might even be capable of beating their starters in a full seven-game series.

They added forwards Amir Johnson and David Lee, which further crowds their frontcourt. Now faced with a glut of solid power forwards, no one is going to get the minutes he deserves.

The jury is still out on the player Marcus Smart will be, but he is absolutely tenacious and helps form the league’s most irritating backcourt with defensive specialist Avery Bradley. For some reason, Isaiah Thomas remains underrated and will need to embrace his sixth man role for all of this to come together.

General Manager Danny Ainge is still loaded with draft picks, which offers the Celtics plenty of long-term flexibility. Ainge must play these cards right in order to give his baby-faced leader a chance to prove that he truly belongs in this league.

Best Case Scenario
Boston’s role players learn from the example David Lee set in Golden State last year, accepting that everyone won’t play as much as they should. With another year in Stevens’ system, Smart progresses into the top defensive floor general in the NBA, while Thomas stops whining about coming off the bench. Thomas has a break-out season and becomes the first unanimous Sixth Man of the Year in league history. Jared Sullinger loses the rest of his baby fat, curing his lingering back issues and enabling him to play a full season. They get bounced in the first round, but the transition out of rebuilding mode is almost complete. Stevens unwillingly becomes the next governor of Massachusetts (just to once again be the youngest in history to do something), but immediately resigns from office and returns to coach the Celtics.

Worst Case Scenario
Ignoring Lee’s example last year, the other players disregard chemistry entirely and instead focus on beating each other to a pulp in practice. As a result, they tire themselves out so much that no one has any energy left for the actual games. Ainge fails to turn their boatload of future draft picks into anything of significant value and delays his pursuit of a true superstar until the summer. After initiating a mid-game brawl with other teammates, Thomas is traded yet again, but still gets to keep his endorsement deal with Pizza Guys. Upon missing the playoffs, Ainge begins whining about how no big free agents want to play in Boston. Stevens realizes the fans are too mean, and returns home to coach the Indiana Hoosiers (yeah, you’re on the hot seat Tom Crean).