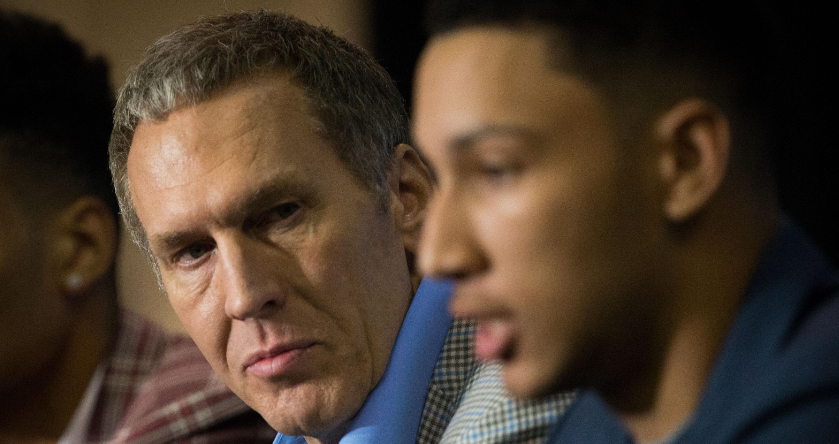 For the second time during this NBA season, a big name is facing criticism for using a fake Twitter account. News broke early Thursday morning that Bryan Colangelo, the Philadelphia 76ers President of Basketball Operations, has resigned, effective immediately.

In the wake of the twitter burner account probe, Bryan Colangelo’s departure in Philadelphia is expected to be described as a resignation, league source tells ESPN.

The 76ers accepted Colangelo’s resignation following an investigation into a report by The Ringer which presented the possibility that Colangelo had used multiple anonymous Twitter accounts to praise himself and admonish both current and former 76ers players. ESPN’s Adrian Wojnarowski and Zach Lowe have reported that Colangelo and 76ers ownership had discussed the possibility of Colangelo’s wife, Barbara Bottini, being behind the accounts. Those reports were confirmed Thursday morning.

Colangelo’s resignation comes more than a week after the organization had said they were looking into the information presented by The Ringer. While some of the burner accounts were sending tweets trying to boost Colangelo, the most damaging ones included tweets diminishing the character of their franchise center, Joel Embiid. Former Philadelphia players, Nerlens Noel and Jahlil Okafor, were often the targets of public ridicule and also the focus of the fake accounts’ ire.

Making matters worse, there have been reports of potential backlash coming from Colangelo’s family members. Jerry Colangelo, Bryan’s father, was once the Chairman of Basketball Operations for the 76ers and brought Bryan into the fold in 2016. Jerry stepped down from the position following Bryan’s hiring, but remained with the team as a special adviser.

Sources tell PhillyVoice: Part of delay in Sixers process was due to pressure from Jerry Colangelo, who threatened to damage team relationships in the event Bryan was fired. https://t.co/0dWUPPtgBz

This incident is not only a massive embarrassment for the organization, but it could potentially have long-term effects as well. Colangelo is a two-time NBA Executive of the Year. His expertise could have made an impact this offseason with free agents such as LeBron James and Paul George available and seemingly in play for the 76ers. There will be some speculation about the magnitude of his actions regarding current players as well. Will the tweets have a lasting impact on the likes of Embiid or Ben Simmons?

As for skepticism surrounding what I wrote about Bryan Colangelo/#Sixers, my sources say relationships with Simmons/Embiid unsustainable given nature of the burner tweets.

Simply put, this is an awful look for both Colangelo and the 76ers. In the interim, Head Coach Brett Brown will oversee all basketball operations. One popular rumor floating around is that the 76ers could take a long look at former Cavaliers GM, David Griffin. The possibility of Griffin luring James to Philadelphia might be too enticing for the 76ers to pass up. The 76ers will have to make hard decisions in the coming months that may determine how successful their future will be.