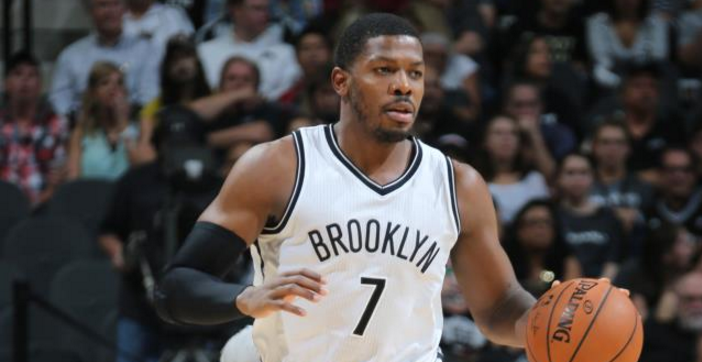 Widely regarded as the worst contract in the NBA, the Brooklyn Nets have officially parted ways with shooting guard Joe Johnson. Johnson reached a buyout settlement with the Nets in hopes of joining a title contender once he clears waivers. Since new general manager Sean Marks released Johnson before next Tuesday’s deadline, he is playoff-eligible for whichever team he decides to join.

It’s rumored there are plenty of teams interested in Johnson’s services, as the Cavaliers, Celtics, Hawks, Heat, Raptors, Rockets and Thunder are all expected to make a strong push. Over his 15-year career, Johnson has appeared in 87 postseason games and has averaged 17.3 points, 4.4 rebounds and 3.5 assists per game.

While plenty of teams plan to pursue him, the race will likely come down to two teams – the Cleveland Cavaliers and the Oklahoma City Thunder. Both squads boast legitimate championship aspirations, and would be appealing destinations to Johnson for separate reasons.

The Cavs have the easiest path to the NBA Finals, as Johnson would get to avoid the Western Conference competition. However, Cleveland is very comfortable with J.R. Smith starting at shooting guard, meaning Johnson would have to assume a second unit role. It would be an unfamiliar position for Johnson, who has rarely come off the bench in his career.

In Oklahoma City, there is a huge void at the shooting guard position that Johnson could immediately fill. Dion Waiters, Andre Roberson and Anthony Morrow have been dreadful, and Johnson could provide the 3-and-D role the Thunder has so desperately coveted. However, signing with the Thunder makes a title tougher for Johnson, as OKC will need to get through the Spurs and Warriors to make their first Finals appearance since 2012.

With both teams believing they have a great shot at acquiring the 7-time All-Star, Johnson should have the perfect opportunity to prove why he was being paid $24,894,863 this season.