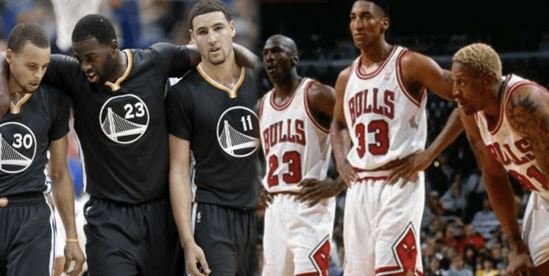 It’s the question every NBA fan wishes more than anything they could get a legitimate answer to. As the Golden State Warriors (54-5) inch closer and closer to the 1995-1996 Chicago Bulls’ unprecedented 72-10 regular season record, the question becomes more and more compelling.

While the two squads competed in different eras and therefore play different brands of basketball, it doesn’t mean we can’t still draw up a hypothetical showdown. Fans wouldn’t want to only see the two teams square off once, so it’s only right to envision it as an NBA Finals series.

With it being a postseason series, the rotations would be shorter and the physicality would increase, which certainly plays into the hands of the Bulls. However, the Warriors appear destined to break the Bulls’ 72-10 mark, meaning they would have home-court advantage in this 7-game series.

Let’s take a look at the 3 key matchups to see how things would shake out:

Harper was a tenacious defender, but we are quickly learning that no one can stop the force that is Stephen Curry. Kerr would not even be assigned to Curry, as Phil Jackson would likely elect to put Michael Jordan or Scottie Pippen on the Baby-Faced Assassin in instances where Kerr is on the floor. Either way though, it’s impossible to stop a guy who is deadly 30 feet from the basket.

Here’s where things suddenly get very scary for the Warriors. Not only would Jordan – one of the greatest defenders in NBA history – completely lock down Thompson, but Iguodala would have no chance of containing No. 23. While Iguodala was given MVP honors in the 2015 Finals, people seem to forget that LeBron averaged 35.8 points against him. With Jordan being an even more effective scorer, there’s no telling what he would do to Golden State’s defensive stopper. Can you even imagine the trash-talking that would be taking place between Draymond and the combination of Pippen and Rodman? That alone could turn into a UFC brawl. With Green being revered for his versatility, the duo of Pippen and Rodman is a rare instance where another team can match Golden State’s typical advantage. Rodman would be a burden for Green to compete with on the glass, and Pippen could comfortably guard Draymond when Golden State resorts to small-ball. As is the case with most tightly contested contests, coaching would also have a very large impact. While the hypothetical showdown suddenly gets more complicated with Steve Kerr coaching the Warriors and playing for the Bulls, we can pretend the two are mutually exclusive. Despite Kerr’s impressive start to his head coaching career, it’s still safe to assume 11-time champion Phil Jackson would have the strategic edge.

The Bulls’ suffocating defense would take the Warriors out of their rhythm, and MJ would will his team to victory. Plus, you think there’s any chance Jordan would let his unblemished NBA Finals record fall to 6-1?