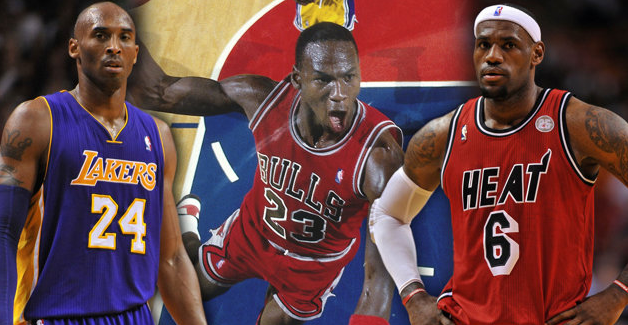 With LeBron James, Dwyane Wade, Carmelo Anthony and many others putting the finishing touches on their 13th season in the league, one of the most compelling arguments is how the ’03 draft class stacks up against the very best.

On most accounts, the 1984, 1996, and 2003 draft classes rank at the top, with the order being interchangeable based on personal preference. We’ve decided to take it a step further, and compare these legendary drafts by breaking our analysis down into several categories.

The result sheds some light on what truly was the best draft in NBA history:

Which draft could form the best starting lineup?

Jordan has to play a bit out of position at the 3 for the ’84 squad, but for all intents and purposes, he would be fulfilling the same duties offensively since Robertson isn’t much of a threat on that side of the floor. Barkley and Hakeem would be tough for any front court in history to stop, and Stockton and Robertson would be absolute pests to opposing guards.

The ’96 and ’03 drafts would have plenty of star power at the guard positions, but neither class would have any sort of answer for Hakeem. The fact that they’d also have to deal with MJ as well makes this category a no-brainer. Which draft offers the most depth?

In our hypothetical round robin, at some point a bench of some sort will have to check into the game. This is where the ’96 class shines with their immense backcourt depth.

With Stephon Marbury, Ray Allen, and Peja Stojakovic not even cracking the starting lineup, it would be a nightmare for the other teams to handle when they check into the game. A Nash-Ray Allen-Peja lineup would be an absolute joy to watch, and 12th man Derek Fisher is good for one “how in the world did he make that shot” per game.

The ’03 squad has a respectable bench, as a unit of Mo Williams-Leandro Barbosa-Nick Collison-David West sounds like something the Spurs will effectively employ four years from now (when each guy is 42), but severely lacks the star power of ’96. The ‘84 squad is a bit better as Otis Thorpe would create a great 3-man rotation of bigs alongside Barkley and Hakeem, but when Sam Bowie is in danger of making your team, there’s going to be some issues. Which draft offers the most athleticism?

It’s hard to pick against LeBron James in any sort of competition including athletic talents, but the rest of the 2003 draft class only furthers the argument. The combo of Dwyane Wade and T.J. Ford would probably be in the running for the fastest backcourt in basketball history, and Carmelo Anthony and Chris Bosh are athletic freaks in their own right.

Jordan and Alvin Robertson would be an absolute terror on the defensive side, and Hakeem is one of the quicker big men we’ve seen in the league, but it just doesn’t seem right picking a team starting Charles Barkley and John Stockton as the most athletic. Outside of Kobe, the ’96 draft doesn’t have a whole lot of dominant athletes, and LeBron and Jordan always overshadowed Bryant athletically.

All in all, the slight edge has to go to the ’84 draft. In any sort of hypothetical basketball comparison, it will more than likely come down to the stars of the team, and the ’84 draft has 4 of the very best players to ever play their position. The ’96 and ’03 drafts are no slouches, but as usual, MJ comes out on top. Final Verdict – The 1984 Draft is the best in NBA history.