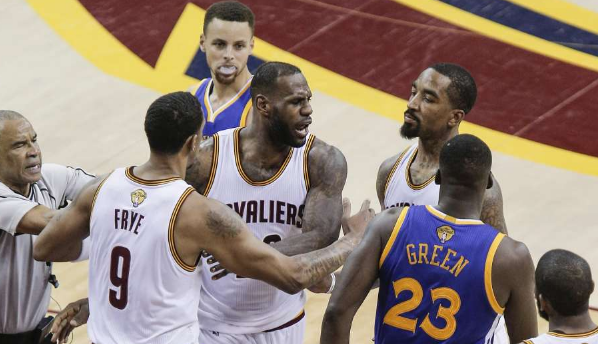 They say a series hasn’t truly begun until one team wins a road game. Well, if that’s the case, the NBA Finals is officially underway after the Golden State Warriors defeated the Cleveland Cavaliers at Quicken Loans Arena, 108-97.

The victory gives the Warriors a commanding 3-1 lead as the series goes back to Oakland, but the win didn’t come without controversy.

For the third time this postseason, the league will have to review a play in which Draymond Green made contact with an opponent’s groin. Late in the fourth quarter, Green and LeBron James get tangled up:

Due to his recent track record of technical fouls, Green is now in jeopardy of being suspended for Game 5. If the league rules the James-Green altercation is a Flagrant 1, Green will miss the next game, and if it is ruled a Flagrant 2, Green would be suspended for Games 5 and 6.

Despite the 3-1 series lead, the last thing Golden State wants is to let Cleveland back in this series. Playing without Green would certainly increase the Cavaliers’ chances, as Draymond’s versatility has posed many problems for Cleveland.

The league is expected to make a decision within the next 24 hours, well before Game 5 Monday night in Oakland.