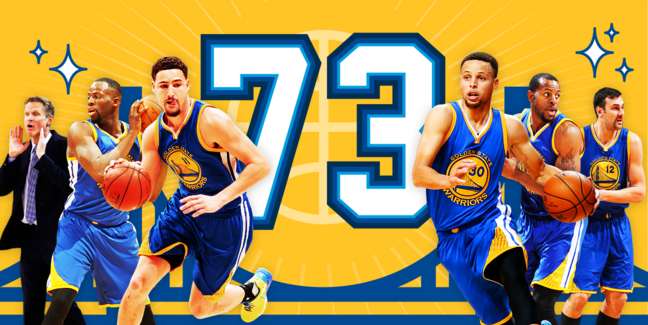 Following months of build-up and anticipation, the Golden State Warriors officially made history. With their final regular season victory over the Memphis Grizzlies, the Warriors surpassed the 1995-1996 Chicago Bulls and finished 73-9 to secure the best NBA regular season record of all-time.

Current Warriors head coach Steve Kerr was also a member of the ’95-96 Bulls squad, and recognized what an honor it was to be part of history twice.

“I never thought anybody would ever come close to breaking the record when I was lucky enough to be a part of it,” Kerr said. “I’m shocked we are where we are just because of how difficult it is.”

It was an unforgettable night for the NBA, as Golden State wasn’t the only team in California experiencing a bit of history. Kobe Bryant played his final game in front of a raucous Staples Center crowd, and turned in a 60-point performance as his final goodbye.

Despite Kobe’s stunning finale, the Warriors’ 125-104 victory to make history stole the headlines. Even though he didn’t play a second in the fourth quarter, defending MVP Stephen Curry torched Memphis for 46 points. His 10 three-pointers brought him to a season total of 402 – smashing his and the NBA’s previous record of 286.

Curry and the Warriors will hope to take their triumphant accolades into the playoffs. While regular season records are nice, Golden State is well aware that the real goal of a second straight NBA title begins.

The first team in their way is the Houston Rockets, but with the way the Warriors have played all season, the first round should be a breeze.