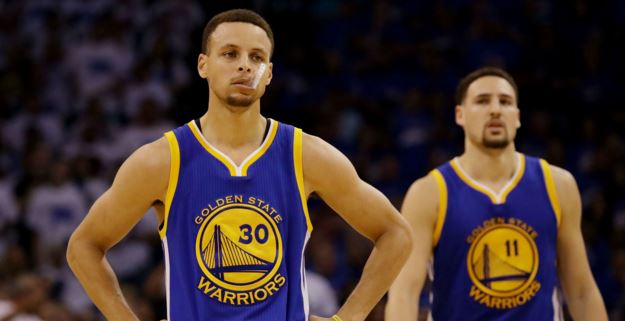 The Warriors didn’t just lose Game 3 Wednesday night against the Oklahoma City Thunder, they were run out of the gym. Thunder coach Billy Donovan’s adjustments worked to perfection, baffling Golden State and leaving them with more questions than answers heading into Game 4.

But for as ugly as the 133-105 defeat was for the Warriors, it gets even worse. Golden State might be forced to play a pivotal Game 4 without All-Star forward Draymond Green due to this play:

It is the second time in as many games that Green’s leg has connected with Steven Adams in that spot, which many believe could factor into the NBA’s decision to issue a suspension. While Green, head coach Steve Kerr and the rest of the Warriors have adamantly denied the kick being intentional, the Thunder certainly view the situation differently.

Russell Westbrook said, “Honestly, I think it’s intentional. That’s two times in the last two games. I don’t think you can keep [hitting] somebody in their private areas.” In addition, the victim of both low blows, Steven Adams, added “He’s pretty accurate, that guy.”

While the league’s decision remains up in the air before Tuesday’s Game 4 showdown, there’s certainly an uneasiness within the Warriors’ organization.

Following a historic 73-9 regular season, many expected Golden State to waltz through the playoffs and claim their second consecutive NBA title. Instead, they find themselves trailing 2-1 in the Western Conference Finals, facing a must-win situation against a confident Thunder squad.

But for as easy as it would be to overreact and count the Warriors out, they have proven time and time again that they perform best with their backs against the wall. This team hasn’t lost two games in a row all season, beat the Thunder by 27 points in Game 2 after losing Game 1, and has never lost a playoff series with Steve Kerr as their head coach.

Oklahoma City might have the momentum, but if Golden State’s record-breaking season has been any indication, the Warriors should take it right back in Game 4.

They just have to hope Draymond Green will be in uniform to help.