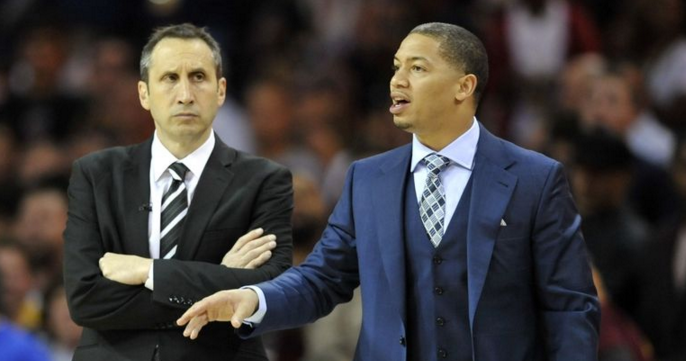 With new head coach Tyronn Lue taking over for David Blatt, the Cleveland Cavaliers were expected to look completely reenergized. Instead, it was Cleveland’s lack of energy that drew the ire of Lue.

Following an embarrassing 96-83 home loss at the hands of the Chicago Bulls, Lue called out his players for not being in good enough shape to run an up-tempo styled offense. Lue’s immediate criticism can be taken as a welcomed sign for Cleveland’s fans, as the biggest knock against Blatt was his unwillingness to hold his own players accountable.

It appears that won’t be an issue with Lue.

After harping on his own team’s conditioning, Lue explained, “As far as pace-wise and the vision that I have for this team, I think we got to play faster. I think we got to utilize Kyrie and LeBron’s one-on-one ability in transition to open the floor more, running more drags and getting that weakside big out, and we just haven’t been accustomed to playing that way. It’s something new, so I got to do a better job of getting us in some better shape.”

While Cleveland proved unable to implement this system in Lue’s debut, the players were visibly enthusiastic about their new coach’s vision. Kyrie Irving called it “exciting” and believes it is a “brand of basketball that is tailor-fitted for the players that we have on our team.”

LeBron James seconded Lue’s assessment that the team needs to get in better shape, and finally appears to be on the same page as a Cleveland head coach.

Despite the loss, it’s an encouraging sign in Cleveland to see how players have responded to Lue’s immediate assessment. The talent for an NBA Championship is there; the Cavs just need to get in shape and figure out how to put the pieces together.