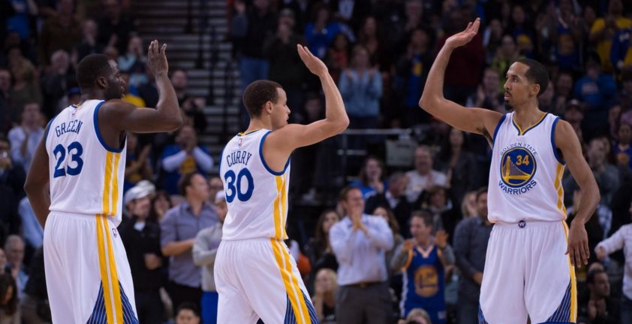 This season, the Warriors are averaging 115.8 points per game with a +14.6 point differential through 23 games. But for as dominant as Golden State has been, 82-0 isn’t actually realistic. So even though nobody can slow them down right now, you have to wonder who will hand them their first loss.

5-0 on their current road trip, they get the Boston Celtics on Friday, and then take on the Milwaukee Bucks the following day. Assuming they get through those road tests, here’s their remaining schedule for 2015:

If the Warriors improve to 25-0 after this weekend, they then have five straight at Oracle Arena (where they are essentially unbeatable). LeBron and the Cavs loom as the most obvious spoiler during Golden State’s home stand, but containing Curry appears to be too big of a task for any Cavalier to handle.

The defending MVP is averaging 32.2 points, 5 rebounds, and 6 assists in 2015. He’s shooting 53 percent from the field, 46.5 percent from three, and 90 percent from the free-throw line. It’s really getting out of hand at this point, and with Curry showing no signs of slowing down, the Warriors are primed to enter 2016 a perfect 32-0.