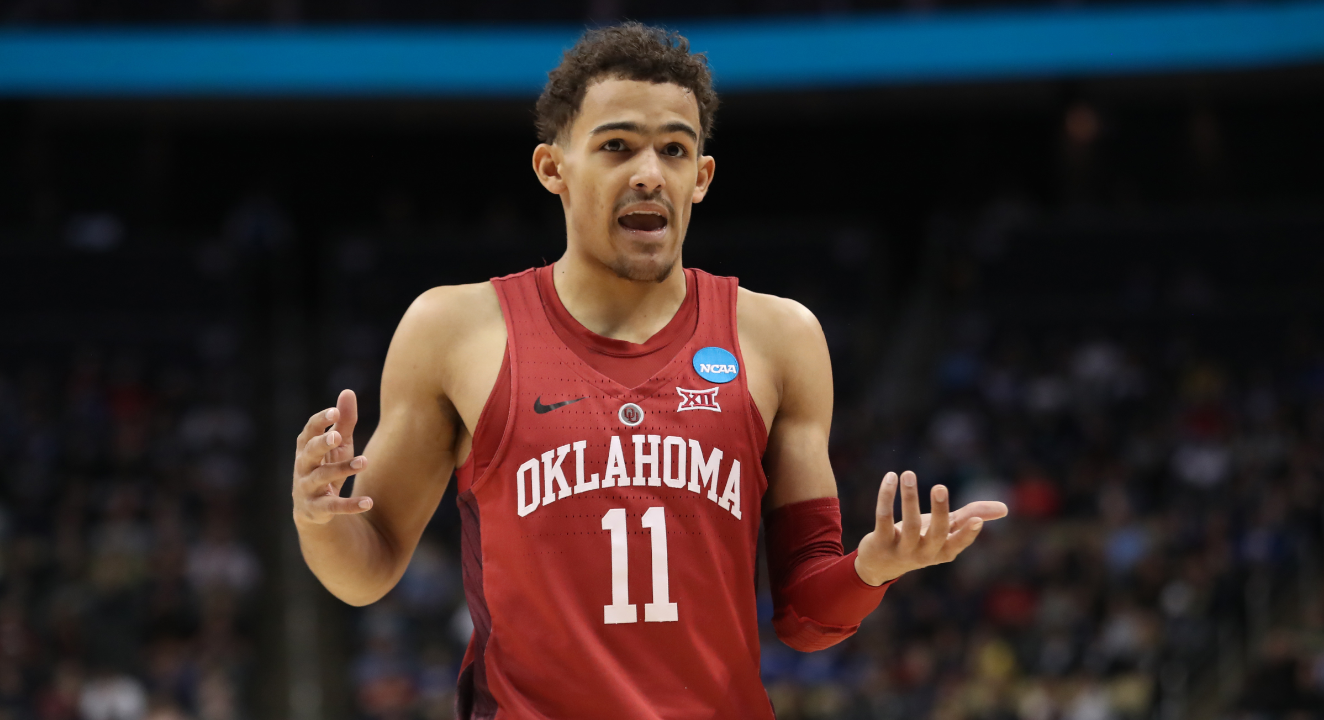 With the Suns apparently locked-in on Arizona’s DeAndre Ayton, a majority of the pre-draft chatter has centered around the Kings and their No. 2 pick. Sacramento stands at an interesting crossroads. They aren’t completely devoid of talent, with De’Aaron Fox, Buddy Hield, Bogdan Bogdanovic, Skal Labissiere, and Willie Cauley-Stein looking like solid pieces moving forward. They do however lack a true star, and drafting anything short of that would be looked at as a failure with the second pick.

We’ve heard Marvin Bagley’s and Mo Bamba’s names floated around this selection. Even Missouri’s Michael Porter Jr. has been hinted as a potential pick. Most interesting about this situation has been the Kings apparent apathy towards Dončić, especially considering Vlade Divac’s familiarity with European basketball.

Here’s thinking those are all smoke screens. Divac and GM Vivek Ranadivé can’t leave Thursday without a player Sacramento can rally behind. Bagley, Bamba, Porter, and Jaren Jackson are nice players, but aren’t filling stadiums anytime soon. Dončić is a bonafide star, and will instantly spark the Kings’ season ticket sales.

The 2017 NBA Draft had its fair share of would-be stars throughout its entirety. Jayson Tatum, Donovan Mitchell, and Lauri Markkanen were all lottery picks that lived up to the hype in Year 1. However, the rest of the lottery has plenty of question marks.

Lonzo Ball hasn’t proven he’s able to shoot at the NBA level, and Markelle Fultz forgot how to shoot entirely. With both of their teams in the hunt for a marquee free agent, each of their names could be on the chopping block as trade pieces.

De’Aaron Fox could be rendered obsolete if the Kings peg Dončić or another playmaking guard with their top pick. The former Kentucky guard isn’t a premier shooter or defender, making him a weak option as an off-the-ball player.

Other names that could potentially be on the move are New York’s Frank Ntilikina and Charlotte’s Malik Monk. The former is well-regarded by his team, but New York begs for stars and a few of them appear to be on the market. Ntilikina is the best asset the Knicks have if they wish to hold on to Kristaps Porzingis and the No. 8 pick.

Monk often looked lost in his rookie year, spending a majority of his time with Charlotte’s G-League affiliate. With the Hornets determined to shed salary, Monk could be attached to any one of Nic Batum, Marvin Williams or Dwight Howard to help sweeten the pot.

3. Clippers Hold On To Both Picks

Although the Lakers have garnered much of the press this offseason with their pursuit of a Superteam, the other team in Los Angeles holds a stronger hand going into Thursday. Equipped with two lottery picks, the Clippers could use any number of means to bolster an overachieving group from a season ago.

With strong names at the top of the board, the idea of the Clippers flipping both of their picks for a top-5 selection has been thrown around. However, standing pat is the way to go here, and the route the Clippers will likely take.

Jerry West has long been revered for his managerial abilities over the years. History suggests that there will be plenty of talent left on the board when they’re on the clock. Just in the last few years we’ve seen Steven Adams (12th, 2013), Dario Šarić (12th, 2014), Zach LaVine (13th, 2014), Devin Booker (13th, 2015), and Donovan Mitchell (13th, 2017) go in either of those two spots. The talent can be available, West just has to unearth another gem.

4. Trae Young Ends Up A Cavalier

Easily the most polarizing player in the pool, Young has been under a microscope ever since the start of the college basketball season. Touted as the “next Steph Curry”, Oklahoma’s former point guard is a deadeye shooter that led the nation in both assists and points in his lone year in school. While comparing him to the former two-time MVP isn’t quite fair, Young is a unique talent that will hear his name called fairly early on Thursday.

The team that will pull the trigger is the one that’s on the brink of losing one of the game’s all-time greats for a second time. With LeBron having one foot out of the door, the Cavs will be in scramble mode in securing the team’s next star. Last time around, they lucked into Kyrie Irving. They won’t pass on the chance to pick their next great point guard.

The Nuggets and Grizzlies have been pegged as two of the likeliest teams to trade down on Thursday. This has primarily spawned from the idea that both teams are in a “win-now” mode, and don’t figure a 19-year-old can help them in the short-term. Whether those teams are delusional or not, it will surely affect their approach to the draft, and could have a lasting impact on how everything plays out.

In a vacuum, the Nuggets appear more primed to move out of their spot. They seem willing to give up Kenneth Faried for nearly nothing, and every dollar counts with super-sub Will Barton set to hit free agency. Faried can exist in a very particular ecosystem. Some team in the 20’s would jump at the idea of taking on his salary to move up a few spots.

The Grizzlies, however, face a far more complicated role moving out of the No. 4 spot. They desperately want to move Chandler Parsons and his albatross of a deal. Virtually no team would take him without major compensation, but is the fourth pick too steep of a price for Memphis to pay? Our guess is yes — they hold onto the pick, and, reluctantly, Parsons as well.

6. Lonnie Walker Slides Into The Lottery

Every year, a surprise name rapidly moves up the board in the days leading up to the draft, and ends up getting selected far higher than originally anticipated. In 2018, Walker fits the bill of a fast riser.

The 6’4″ wing from Miami is an effortless athlete with a picture-perfect jump shot. He projects to instantly help on defense, spread the floor on offense, and has the potential to develop into an elite 3-and-D player. Virtually every team in the league is in need of players that cross-match on the defensive end, and hold their own on offense. Versatile players such as Walker will be highly valued moving forward, and this draft will set the tone.

7. A Team Trades Up For Mo Bamba

Just as a player quickly rises the ranks in the days leading up to the draft, each year has a player that waits for his name to be called a bit longer than he expected. Teams could get wary of medical records, deem the prospect a bad fit with their current roster, or happen upon another player they never expected to be available at their pick. Whatever the reason ends up being, there always seems to be at least one or two players that fall dramatically on draft day.

For what it’s worth, there’s no way Bamba makes it out of the top-10. His blend of athleticism and outside shooting makes him one of the more intriguing prospects in the draft. However, he comes with certain question marks, and could be leapfrogged by prospects that are perceived to have a higher floor (Bagley, Jaren Jackson, Wendell Carter).

If he makes it past Dallas at No. 5, expect a load of contending teams to be calling Orlando and Chicago in hopes of moving up. One squad to watch for is Boston, who have ample draft capital to make a deal worth while for the other team.

8. At Least Two Future All-Stars Get Picked After The Lottery

This draft is flat-out loaded, and I’m not just talking about the lottery picks.

At the end of the first round alone, you may have the next Jrue Holliday (Creighton’s Khyri Thomas), the next Bradley Beal (Duke’s Gary Trent Jr.), the next Clint Capela (Mitchell Robinson), and the next Draymond Green (Villanova’s Omari Spellman). Troy Brown and Chandler Hutchison are polished wings that can make some serious plays off the bounce. Aaron Holiday boasts one of the strongest bloodlines in the league. France’s Elie Okobo and Bosnia’s Dzanan Musa are great athletes with offensive upside. Jacob Evans is a freakish defender, and Kevin Huerter might be one of the five best shooters in the league one day. That’s not even considering collegiate stars Donte DiVincenzo, Jalen Brunson, and Grayson Allen.

Don’t sleep on the end of this draft. The league’s next big star could be found after the lottery.