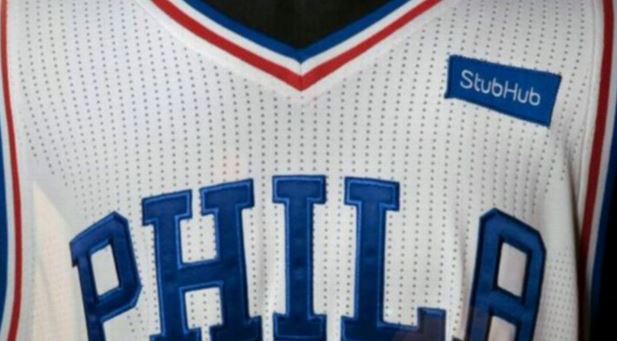 Earlier this year, the league announced that they would allow advertisements to be placed on NBA jerseys. The 76ers pounced on this opportunity, and have already agreed to a deal with the world’s largest ticket marketplace, StubHub.

Starting in the 2017-18 season, a StubHub patch, approximately 2.5 inches by 2.5 inches, will appear on Philadelphia’s jerseys.

The 76ers are the first team from the four major U.S. sports to feature an advertisement on a jersey, and have agreed to a contract worth $5 million per year for three years.

It’s a massive move for the 76ers – a young team that has struggled immensely over the last few seasons. The team’s CEO, Scott O’Neil, is extremely excited about the agreement.

“First off, hats off to Adam Silver,” O”Neil told USA TODAY Sports. “He’s a commissioner who will take opportunities and will make the right decision and sometimes the tough decision and he continues to lead through policy. He gives teams the opportunity to drive our business.”

StubHub, a company designed to sell tickets to various types of events, stands to benefit from this ad placement. The company’s president, Scott Cutler, said he is ecstatic to team up with the Sixers.

“We are thrilled to further our long-standing relationship with the Philadelphia 76ers to announce the NBA’s first jersey patch sponsor,” said Cutler. “StubHub and the Sixers share a common vision as innovators in the live entertainment space and specifically, for the fan experience, and this partnership is another example of ways we continue to break new ground together to further our industry and ultimately, connect more deeply with fans.”

This is a revolutionary move for the NBA, and one that should result in 29 more teams striking deals with sponsors in the very near future.