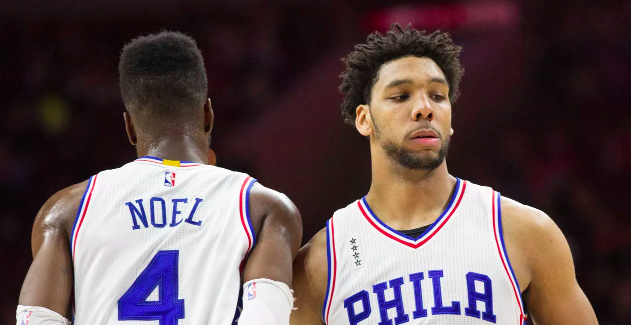 It’s NBA Draft season, and to the surprise of no one, the Philadelphia 76ers find themselves atop the draft board. After years of horrendous on-court play, the No. 1 pick gives many hope that the franchise will soon turn things around.

However, Philadelphia finds itself in a bit of a tough position as it decides whether to select Ben Simmons or Brandon Ingram. The team already has three post players in Jahlil Okafor, Nerlens Noel and Joel Embiid, meaning another big man in Simmons would create a logjam in the frontcourt.

With clutter at the power forward and center positions, reports have surfaced that the Sixers are looking to trade either Noel or Okafor — a wise move for a team that wants to make room for Simmons while adding talent at other positions.

Many believe Okafor is the more likely to be traded, as the No. 3 pick in the 2015 Draft had an up-and-down rookie season. His play on the court was impressive, but two nightclub incidents during the season have left many questioning his character. The Sixers will gauge his trade value, looking for veterans and/or draft picks in exchange.

And with the No. 1, No. 24 and No. 26 picks, Philadelphia has the necessary assets to get better immediately. Head coach Brett Brown appears to be on board with this plan, telling reporters, “For the first time in four years, we’re going to enter with a legitimate approach to free agency.”

There should be no excuses for the 76ers heading into next season, and that on-court improvement will likely start with the departure of Jahlil Okafor.