The NBA season ended pretty much as everyone expected. Golden State made its way through the Western Conference before utterly disposing of Cleveland to win its third NBA Championship in four years. While the 4-3 series victory over Houston provided some theater, the Warriors really weren’t in any danger of having their crown usurped.

A 4-0 sweep of the Cavaliers made for a rather boring Finals. Conventional wisdom states that fans will now have to wait until October for any real excitement revolving around the league. However, the next few weeks are far from conventional.

The NBA offseason is shaping up to be the craziest non-playing span in the history of the sport. A litany of big names are going to be available via free agency. With some teams strapped for cash, swaps of highly-priced players could very well happen.

Ultimately, everything hinges on LeBron James.

With all due respect to Adam Silver, James is the most powerful man in all of professional basketball. His decision this offseason will create a residual ripple of transactions. Depending upon which team he chooses to align with, the ripple could resemble a small wave, or a gigantic hurricane of events.

There are a number of scenarios which in all likelihood would cause mass hysteria around the league. We’re going to utilize hypothetical landing spots for James — and discuss how that’d impact the rest of the league. From what we’ve determined, the following teams have the best shot at landing LeBron: Cleveland Cavaliers, Houston Rockets, Boston Celtics, Philadelphia 76ers, Los Angeles Lakers.

While many are quick to presume that James would leave his hometown team, this is far from a certainty. The prospect of leaving home is truly easier said than done. With his entire family a stone’s throw away from Cleveland, James could very well opt to stick around for a retooling of the roster rather than the dreaded rebuild.

Cleveland does have a bunch of undesirable contracts (Jordan Clarkson, JR Smith, Tristan Thompson). However, it also has two assets available to potentially use in a trade: Kevin Love and the 8th Overall Pick in this year’s draft. When packaged together, the Cavs may be able to get a younger, more athletic option to pair with the rest of the lineup. It isn’t yet known as to what it’ll take for LeBron to stick around — though staying with the Cavaliers in a far weaker conference seems like a wise choice from a basketball perspective.

Even if LeBron stays in Cleveland, it doesn’t appear likely that other teams in the East or the West would make wholesale changes to combat this choice. Boston will regain Kyrie Irving and Gordon Hayward — and very well could make another move (perhaps Kawhi Leonard?) with its treasure trove of draft picks and young players. Cleveland is somewhat limited on what it can do from a personnel standpoint. Barring something unforeseen, the Cavs would likely be behind Boston in the Eastern Conference’s pecking order by the time next season starts. LeBron heading to Houston would be a monumental game-changer. For one, this would unequivocally make Boston the favorite to advance from the Eastern Conference. As currently constituted, there’s not another team in the East possessing Boston’s talent, depth, or possible resources. This may even force another Eastern Conference team to keep up with the proverbial NBA arms race — and respond to the move with one of their own.

The hypothetical troika of James, Chris Paul, and James Harden would be incredibly dynamic. Houston likely would have to gut its entire bench to financially make the move. With that said, the Rockets would further be equipped with three elite playmakers — something only one other team (Golden State) can claim. Golden State wouldn’t appear to have much money to make a monumental move. However, the Warriors cannot be counted out of pulling a rabbit out of the proverbial hat.

James to Houston would further the stranglehold both the Rockets and the Warriors would have on the Western Conference. Other Western Conference teams may look to ‘keep up with the Joneses’ — or do the opposite by offloading veteran talent for younger players. Many teams could be forced into waiting around for these two squads to age out of contention. A LeBron to Boston move would change the complexion of the entire NBA. Boston would not only possess the best player on the planet, but it would further stockpile big, long, versatile wings to combat the explosiveness of the Golden State dynasty.

Furthermore, pairing James with fellow brainiac Brad Stevens seems like a match made in basketball heaven. There’s no telling how potent the Celtics would be with James facilitating to/playing with Jayson Tatum and Al Horford (among others). This potential transaction may have complications due to the frosty past between James and Kyrie Irving.

If this scenario were to occur, there’s a strong chance Boston would look to trade Irving to further appease King James. With injury issues and a max contract looming, jettisoning Irving as a result of James’ entry could be a blessing in disguise. Duly, Irving would certainly draw a ton of interest from around the league.

Philly — an upstart team chock full of promise — would be absolutely nasty with LeBron in tow. From a basketball perspective, a James-Philadelphia pairing makes a ton of sense. In this hypothetical scenario, LeBron gets to stay in the Eastern Conference — where the competition is as strong as the Colangelo’s Twitter burner accounts. Secondly, there isn’t a team anywhere equipped to adequately defend the likes of James and Ben Simmons for long stretches of time. Both are passing savants, and register physically as big as most power forwards in the league.

Additionally, James has never in his career played with a player like Joel Embiid. Whether it be Simmons or James feeding him the rock, Embiid will be even more of a monster against any single coverage in the post. The 76ers are a young team — something LeBron isn’t overly crazy about playing with.

There’s also a glaring lack of postseason experience across the board. Tweaks to the roster will need to be made (which includes an integration of perimeter shooting). With that said, this team would represent both the present and future of the NBA. It might not win the NBA Championship, but it’d be incredibly fun to watch. It could even force Boston into pursuing a trade for the likes of Leonard or Anthony Davis. The Los Angeles Lakers have long been associated with James. How many times have we heard about LeBron’s multiple houses in LA — or even the rumors that he’s already enrolled his children in Los Angeles-based schools? There’s not a whole lot on the Lakers’ current roster aside from youth. Mass changes must be made to construct what LeBron deems as a championship-level roster.

As such, it makes this possibility even more fun.

The Lakers have enough cap space to sign one max free agent, and likely will have space for two with some minor tinkering. Additionally, there’s a desperation with this franchise. Los Angeles isn’t used to losing. It’s been nearly a decade since the Lakers were relevant. With that said, the braintrust of Magic Johnson and Rob Pelinka won’t be shy about rolling the proverbial dice.

If LeBron were to sign with the Lakers, other moves likely will have preceded this occurrence. A trade for Leonard could be in the cards. This may involve LA trading away two of — if not all of the Brandon Ingram-Kyle Kuzma-Lonzo Ball trio. If a Leonard trade is nixed, Paul George is sitting right there in free agency. Paul is also off of Houston’s books. With the Ball family circus becoming a real hindrance, could the Lakers trade Lonzo with the intention of then signing CP3?

A LeBron-CP3-Leonard/George trio looks quite impressive. There are a ton of iterations to this premise still remaining. Julius Randle could (in theory) be re-signed. DeMarcus ‘Boogie’ Cousins is a tasty treat on the free agent market. There’s also the potential of trades with other teams. LA native DeMar DeRozan likely could be acquired (especially since LA has the cap space to absorb his contract).

If the Lakers were to get LeBron (and potentially Leonard), Houston would likely then pivot to George. This could then result in three super-team juggernauts in a loaded Western Conference.

It will be fascinating to see how all of this shakes out. Once the biggest domino in the sport falls, hysteria is guaranteed to ensue. 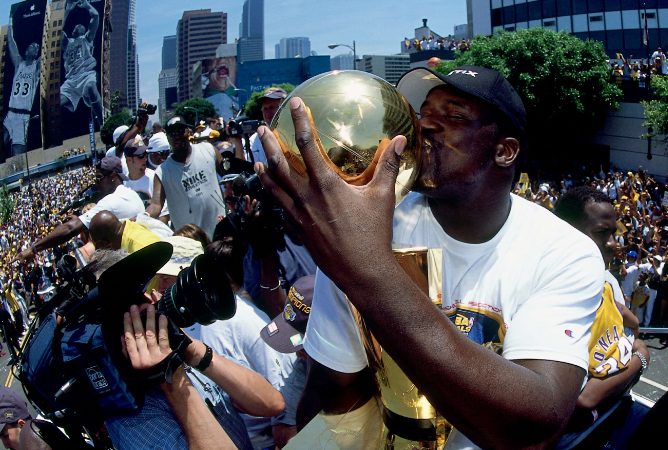