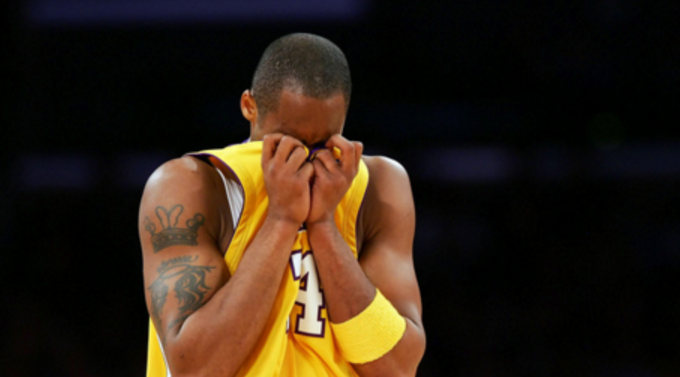 It’s no secret the past few years have not been kind to the Los Angeles Lakers. From missing out on big name free agents to producing a horrible on-court product, optimists believed Kobe Bryant’s retirement would usher in a new era of Laker dominance.

Drafting Brandon Ingram with the No. 2 overall pick was a tremendous coup, but beyond that, there hasn’t been anything for Lakers Nation to celebrate. Not only were the Lakers denied meetings with the two biggest names on the market (Kevin Durant and Hassan Whiteside), but the Lakers’ subsequent moves signal how far the franchise has plummeted.

Los Angeles POUNCED on Timofey Mozgov, an unheralded center whose contributions to the NBA Champion Cleveland Cavaliers can best be summarized in this one photo courtesy of Bleacher Report: The Lakers gave Mozgov a four-year, $64 million contract – the kind of move a desperate franchise makes who is afraid of other pursuers. Sadly though, that’s where the Lakers now find themselves – second-guessing their own allure and throwing money at players who in years past would’ve begged to don the purple and gold.

In addition to signing Mozgov, Los Angeles also reached agreements with veteran Luol Deng and incumbent shooting guard Jordan Clarkson. Deng’s contract is for four years and $72 million, and Clarkson’s is for four years and $50 million. While both players are nice signings, it isn’t the kind of marquee acquisition Lakers Nation was expecting this offseason.

Instead, the Lakers will head into the 2016-2017 season with a core of D’Angelo Russell, Jordan Clarkson, Brandon Ingram, Luol Deng, Julius Randle and Timofey Mozgov. It may be an improvement over their dismal 17-65 campaign last year, but banner No. 17 isn’t coming anytime soon.