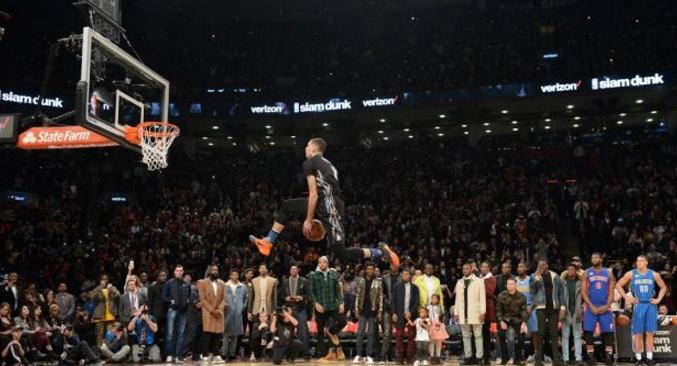 Zach LaVine, rising star of the Minnesota Timberwolves, has won two consecutive slam dunk titles, but today he has his biggest win yet, the hearts of students at the Metro Deaf School in St. Paul.

As LaVine entered the room, he was showered with cheers and admiration not unlike the stunned reactions following his gaudy dunks the past two years. But this was different. In his first two years in Minnesota, LaVine has become attached to the Metro Deaf School, a school that is home to about 100 students that are hearing impaired.

After taking a sign language class in high school, LaVine became interested in working with kids who were hearing impaired. LaVine and a friend of his took their newfound knowledge of the language to the court, as they would communicate with each other using sign language.

“Everyone thought we were doing dugout signs (like they use) in baseball,” LaVine said. “We were doing a whole different language. It was really cool.”

In hopes of connecting with the community, LaVine and the Metro Deaf School were a natural fit. While the students were surprised to see an NBA player at their school, let alone one who could communicate with them, the relationship offers a chance to have a special bond.

“I’m here. I can talk to them,” LaVine said. “If they look up to me and I can make their day brighter, I’m all for it. I think it’s really cool.”

LaVine returned to the school Monday to usher in the school’s new kitchen, which LaVine paid for with part of his All-Star weekend winnings.

“The biggest part for me growing up was interacting with kids during lunch time and recess,” LaVine said. “They get all their meals catered in. I just thought it would be cool for them to be able to socialize and be able to hang out with each other, eat food together, instead of having to sit in class and eat and regular stuff.”

Although LaVine admits he’s not as fluent as he was in high school, he still sees the benefit of showing up and spending time with the children.

“Sometimes they lose me. But just seeing, oh wow he can do this, is kind of cool,” LaVine said. “It would be like the same thing if I saw one of them come to a basketball court and dribble between their legs and shoot it, I would be like, `whoa wait a minute, I can relate with this kid.”