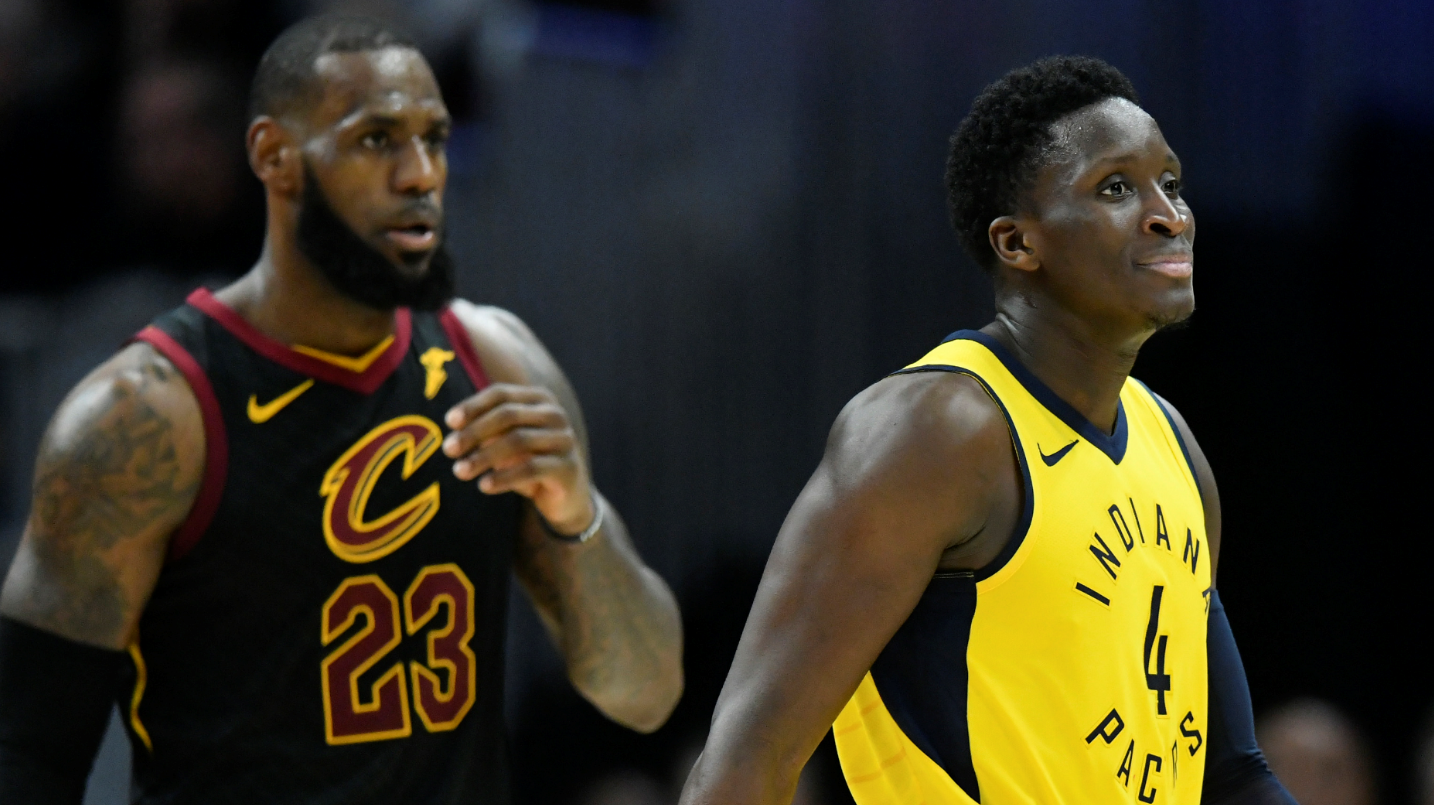 The Pacers are For Real

In the most shocking result of the weekend, the Indiana Pacers decimated LeBron James and the Cavaliers on their home floor to take a 1-0 series lead. Indiana punched Cleveland in the mouth early by racing to a 19-point first quarter lead. After the dominant opening period, the Pacers never looked back — vanquishing the reigning Eastern Conference champs with a wire-to-wire victory.

It’s the first loss in 22 tries for a James-led team in the first round of the postseason. No stranger to historic comebacks, James and company are rightfully unshaken by the loss. With that said, there is certainly room for concern given their poor play down the stretch of the regular season.

Indiana isn’t a team to be taken lightly. The Pacers won 48 games in the regular season (two less than the Cavs did). Duly, the Pacers are led by a legitimate two-way All-Star in Victor Oladipo — and have enough surrounding pieces to make life tough on this vulnerable Cleveland team.

The Cavaliers have found themselves in a dog fight, and the Pacers have proven that this won’t be a one-sided series.

The East Is Wide Open

Cleveland’s current situation, multiple injuries to star players, and the lack of a truly dominant team has the Eastern Conference bracket appearing more open than ever.

James has run roughshod over the East for the past decade. But this year is different. He doesn’t have a reliable ball-handling option like Kyrie Irving or Dwyane Wade to help ease the burden on the offensive end. As a result, his effort on defense has faltered. With the Cavs not playing up to snuff, every other team feels like they finally have a chance.

The Raptors’ playoff woes are well-documented (more on that in a bit), the Celtics don’t know where there scoring is going to come from a on a nightly basis, the 76ers are made up of a bunch of guys that have never been here, and the Cavs just aren’t very good. Even while facing 0-1 deficits, the Bucks, Heat and Wizards can’t be feeling too bad about their chances to advance.

Getting the Game 1 monkey off their proverbial back was crucial for this Raptors team. Entering Sunday’s game, Toronto had lost each of their past ten Game 1’s. Seven of those losses came with Kyle Lowry, DeMar DeRozan, and coach Dwayne Casey in tow. It was a nice win as the franchise breathed a collective sigh of relief. However, the Raptors have to maintain focus as they prepare to continue battle with a non-traditional 8-seed.

Lowry’s and DeRozan’s playoff woes are well documented. Neither player was particularly dominant on Sunday — combining for 28 points on 10-for-28 shooting and seven turnovers.

Washington possesses the same level of talent as the rest of the Eastern Conference’s elite. There’s a strong case to be made for the Wizard duo of Wall and Beal over Toronto’s All-Star backcourt of Lowry and DeRozan. On any given night, Washington’s lead guards can be the two best players on the court. That’s not something you can usually say of the typical 8-seed.

Toronto is up in the series — though it was an 8-point win against a team they won 16 more games than in the regular season. The Raptors have to be clicking on all cylinders if they want to secure their first NBA Finals trip in franchise history.

Ben Simmons and Donovan Mitchell aren’t typical rookies. Entrenched in a newsworthy battle for the Rookie of the Year award, both Simmons and Mitchell used their Game 1 platforms to further enhance their stocks moving forward.

Simmons has been on a tear over the past month, guiding the young Sixers through a fruitful stretch without the services of Joel Embiid. In the “rookie’s” first playoff game, Simmons was in peak form. The Aussie was one rebound shy of a triple-double — chipping in with 17 points, 14 assists, nine rebounds, and excellent defense. Philly blitzed Miami in the second half — pouring in 74 points after the break en route to a 27-point Game 1 win.

So Kelly Olynyk guarding Ben Simmons might be a mismatch 🔥🔥🔥 pic.twitter.com/DhTKNNGSOL

Not to be upstaged, Mitchell had a great showing of his own. Mitchell led the way for the Jazz by tallying 27 points and 10 boards on 50-percent shooting. Facing off against feisty defenders like Paul George and Corey Brewer, Mitchell was composed and confident. It’s rare to see a rookie as the focal point of a playoff offense. However, the Jazz trust Mitchell to score with efficiency whilst also taking care of the basketball.

Simmons might have the edge in voting, but neither of these young studs have shied away from the big moment.

Things were starting to look a little bleak in Oklahoma City for a minute there. The Thunder were reeling to end the year. OKC was truly on the verge of missing out on the postseason with uninspired, .500-level basketball. Andre Roberson’s absence was heavily felt, and Carmelo Anthony was a shell of his former self. Luckily, they had one wildcard that nobody (except the man himself) was accounting for — Playoff P.

George was scorching from the opening jump. The 5-time All-Star was engaged on both ends, and did his fair share of difficult shot-making. By game’s end, Playoff P had chipped in with a game-high 36 points — including eight triples. This statistic broke the Thunder record for most made threes in a single postseason game.

When George is active on both ends, he’s undoubtedly one of the toughest two-way players in the league. Despite OKC’s struggles throughout the year, it can still contend with any team when both George and Russell Westbrook are playing to their capabilities.

The Wolves Have No Idea What They’re Doing

This tweet — courtesy of ESPN Stats & Info’s Micah Adams — adds to a laundry list of puzzling Minnesota moves this year. Usage rate is intended to estimate the amount of team plays a particular player uses while he’s on the floor. Essentially, it’s the number of plays that end with the player shooting, turning it over, or getting to the free throw line.

Jimmy Butler and Karl-Anthony Towns are unquestionably Minnesota’s two best players. They’re the biggest reasons why the T’Wolves snapped a 14-year playoff-less streak. Instead of playing through Butler and Towns, Tom Thibodeau elected to have them be bystanders for a majority of the game while Derrick Rose and Gorgui Dieng attempted to take over.

It didn’t get much better when Thibs finally came to his senses and started feeding his stars. Towns was a deer in headlights — skittishly swinging the ball to the perimeter even when he had a mismatch. Butler ultimately shot the T’Wolves out of the game, as he ended the fourth quarter 0-for-3 from the field with three turnovers. Minnesota’s last play of the game was a microcosm of their troubles. With nearly 10 seconds to play, the Wolves passed the ball zero times, and Butler fired away a twirling jumper that barely drew iron. Even if the ill-advised shot had miraculously went in, Butler’s foot was on the line, and the Wolves would have lost by one.

Even with all of the misplays and coaching sabotage, the Timberwolves still lost by just three points on the road to a 65-win team with the expected MVP of the league. We could have a real series on our hands if Minnesota gets their head on straight.

Boston/Milwaukee Is The Most Competitive Series

It’s not too often you can claim a 2/7 series as the most competitive of the first round match-ups. That’s the sort of thing that happens when a 7-seed vastly underachieves, and a 2-seed is decimated by injuries.

Game 1 between the Bucks and Celtics is what NBA Playoff basketball is all about. We have two evenly matched squads going head-to-head down to the wire. Milwaukee holds the talent advantage, and have the clear-cut best player in the series. Boston has been scratching and clawing all year long, letting their elite coaching and selflessness guide the way.

It’s a compelling battle that can only end with a Game 7 in Boston.

On the other side of the coin, the Warriors are primed to sweep through a Spurs team missing their best player. San Antonio’s ailing star Kawhi Leonard has been officially shut down for the entirety of the postseason. Even so, the scrappy Spurs were expected to compete with a Warriors team missing an All-NBA talent as well. However, the defending champs had other ideas.

Kevin Durant is too good for any of the Spurs’ group of overachievers to handle. Throw in two more All-Stars in the form of Klay Thompson and Draymond Green, and the Dubs have the three best players in the series.

Even without Curry, the Warriors have a chance to sweep the clawless Spurs for the second year in a row.

The NBA Has An Abundance of High-End Talent

Days 1 and 2 of the NBA Playoffs were filled with action and the reassuring fact that the league is in good hands. Even with teams missing Curry, Leonard, Irving, Hayward, Embiid, and DeMarcus Cousins, there was never a sense that the various match-ups lacked substantial star power.

We’ve already talked about the pair of excellent rookies in Simmons and Donovan, but what about the battle between MVP candidates Damian Lillard and Anthony Davis?

The two 8-seeds — Washington and Minnesota — possess arguably four (Wall, Beal, Towns, Butler) of the 20 best players in the world.

Durant and the Warriors remain a star-studded threat (even without Curry).

The Celtics are being led by Terry Rozier, Jaylen Brown, and Jayson Tatum. All are barely old enough to remember the last time their opponent made it past the first round (2001).

There’s also that LeBron guy — who continues to defy the laws of aging in his 15th season.

The league is doing absolutely fine.

James Harden Is A Deserving MVP

Harden looked as good as advertised in Game 1 — dropping 44 points, 8 assists, and about five or six impossible shots. The amount of separation he creates on his patented step back is jaw-dropping. When he’s playing like he did in Game 1, nobody in the world can slow him down.

Even with all of the great talents we listed in the last caregory, Harden has stood a head above the rest. He has been the best player on the league’s best team all year long.

James Harden toying with Andrew Wiggins before hitting the step back 3. pic.twitter.com/Y2iXrLdGj6