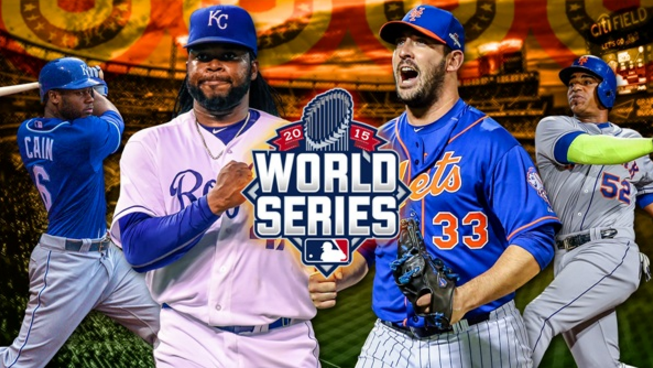 This year’s ‘Fall Classic’ features a match-up between two of the league’s longest suffering fan-bases. Both franchises thrived in the early ‘80s, but haven’t produced a title since 1986, with a combined seven playoff appearances since.

In 2015 though, Kansas City’s pennant run is no surprise. After losing Game 7 to Madison Bumgarner last year, Ned Yost’s squad cruised through the summer. They led the AL in wins, acquired Ben Zobrist and Johnny Cueto midseason, and engaged in multiple needless brawls with the White Sox.

The Mets, on the other hand, are ahead of schedule. They knew they had promising arms, but Wild Card contention was a realistic expectation. Instead—with assistance from Washington Nationals manager Matt Williams and trade deadline acquisition Yoenis Céspedes—New York rolled to the NL East crown. Their October run has been no less impressive, going through Greinke/Kershaw four times and then historically demolishing the Cubs (never trailing for one pitch in the NLCS).

In other words, both teams deserve to be here. Let’s quickly breakdown the matchup:

This one is obvious. The Mets effectively own three aces, all of whom fire gas. Steven Matz is no slouch, either, and also happens to be 24 years-old and can hit 95. Despite their collective youth (the average age of their non-Bartolo starters is 25), they haven’t suffered from a lack of postseason exposure, posting a combined 2.60 postseason ERA.

Kansas City’s rotation is potentially filthy, but shaky. After Cueto’s Game 5 ALDS gem, he got dinged for eight runs in his lone ALCS outing. Edinson Volquez and Yordano Ventura have the stuff of brilliance, but have had ups and downs throughout the playoffs. The Royals undoubtedly field the AL’s most dominant bullpen. Kelvin Herrera, Ryan Madson, and especially Wade Davis headline a group that has been expectedly unhittable this October, posting a 2.85 ERA, nearing their AL-leading 2.67 regular season ERA. The Royals were the best defensive team in baseball this season, leading the league by a mile in Defensive Runs Above Average. I’m willing to say it’s a major reason why they are playing in the World Series again. This comes down to two things: Daniel Murphy’s return to mortality, and Kansas City’s ability to hit fastballs. It seems inconceivable to me that Murphy could lock back into the zone he was in after a five-day layoff, but I can’t conceive of being in that zone in the first place.

Theoretically, if any lineup in baseball is constructed to handle the Mets’ flame-throwing rotation, it might be Kansas City’s. In the playoffs, 38 percent of Harvey/deGrom/Syndergaard’s pitches have been clocked at 95 mph or higher. That is borderline unfair. The Royals, though, put a ton of balls in play, and hit fastballs at a .284 clip during the regular season, slugging .436 against pitches of at least 95 mph. Of course, analyzing these advantages means very little since they’re actually going to play one another to determine a winner. It’s going to be really fun.