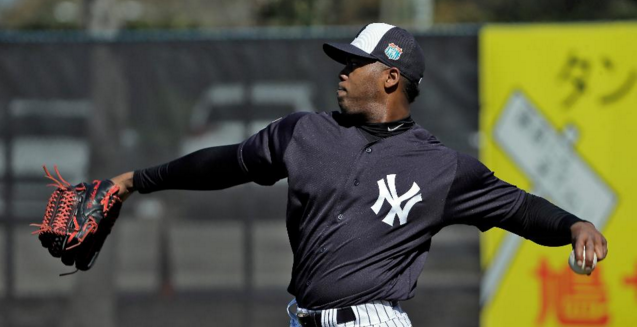 New York Yankees closer, Aroldis Chapman, has been suspended 30 games for his role in a domestic violence incident. Chapman is alleged to have choked his girlfriend, Cristina Barnea, as well as fire off eight shots in an empty garage following an argument at his home in Davie, Florida.

Although no charges have been filed, MLB commissioner Rob Manfred handed down the suspension after a lengthy investigation. Chapman, who adamantly denies hurting Barnea, originally stated he would appeal any suspension, but after a week of discussions, has chosen to accept the punishment.

Chapman released a statement: “I want to take this opportunity — I want this to be clear — I’m apologizing because the use of the gun. It was bad judgment on my part. But I also want to say that I never hurt my girlfriend. I want this to be very clear. I’m taking this punishment because of my bad judgment. [It’s] something that I definitely want to put behind me and move on.”

A precedent has been set, as Chapman becomes the first player to accept a suspension under MLB’s new domestic violence policy. With his first suspension handed down, Manfred must continue to investigate the cases involving star players Jose Reyes and Yasiel Puig.

Puig, who was involved in an alleged bar fight in November, is not expected to be suspended as sources have told ESPN’s Pedro Gomez nothing has been uncovered that would warrant a suspension.

Reyes is on paid leave as he awaits the start of his trial set to take place on April 4 in Hawaii. The Rockies shortstop was charged with assaulting his wife in October.

With news of Manfred’s ruling on Chapman, a much larger suspension for Reyes seems likely. Chapman’s punishment may have set the precedent, but the suspension Reyes receives will send a message to people around the sports world – domestic violence will not be swept under the rug any longer.