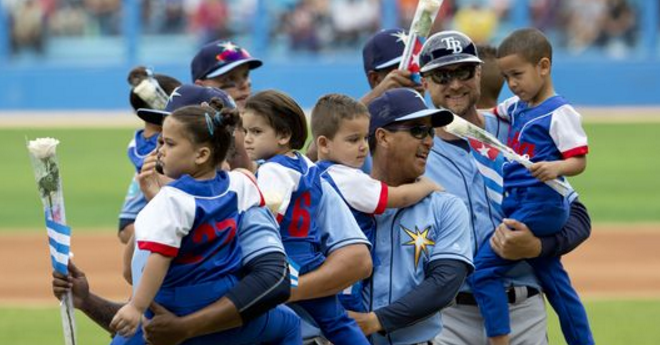 After playing in front of Raul Castro and President Obama in Havana, the Rays returned to Florida on Wednesday. According to Brandenton police Lt. John Affolter, a fan of Cuban descent interrupted Saturday’s game. The man, who appeared to be in his 60s, made his way onto the field before yelling obscenities about the Castro regime and went on to throw the beverages into the dugout.

“I think he just missed a couple of the guys,” INF/OF Taylor Motter said. “I know it hit the back wall and exploded. … We just tried to duck and weave as best we could.”

Although the flying beverages hit nobody, the moment brought potential backlash of the Cuba trip to the forefront.

The first person to apprehend the unruly fan was Rays 3B coach Charlie Montoya, who put him into a bear hug until police made their way across the field.

“I was just holding him and I was telling him, I realized he speaks Spanish, telling him to relax,” Montoyo said. “I didn’t hear what he was yelling, I just saw the two things and then I was holding him. He smelled like beer or rum or something. … To me it was an old person drunk, so I felt bad for him.”

The man was charged with trespassing, causing affray and assault (for throwing the beer can). While this situation didn’t result in any harm, this event is troubling for MLB nonetheless.