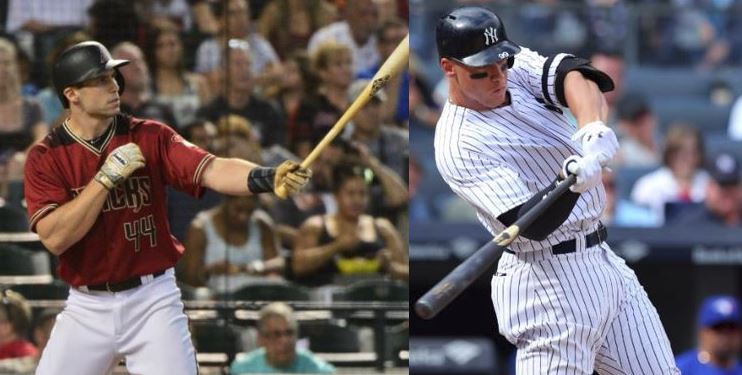 Well, it’s been a long and wacky 2017 MLB season. We saw the most homeruns hit in the history of baseball. We saw Aaron Judge shatter the rookie HR record, and lead the league in WAR while striking out 200+ times. We saw Mike Trout elevate his game yet again; despite missing six weeks to injury, he still posted his best-ever hitting line, slugging .638 while walking more than he struck out. We saw Chris Sale crack 300 strikeouts, and we saw an entire pitching staff – the Indians – dominate the league like none ever has. We saw Giancarlo Stanton finally realize his awesome power for a full, healthy season, coming up one short of joining the exclusive 60 long-balls club.

But now, it’s time for October. As much as I might love May/June for the NBA playoffs, January for the NFL postseason, or March for NCAA madness, no season-ending tournament compares to baseball’s. Maybe it’s because there’s been so much buildup over 162 games. Maybe because it puts individual players in the pressure cooker like no other team sport seems able to. Or maybe it’s because it truly is such an unpredictable crapshoot, as my friend Patrick Zimmerman recently proved.

So with no further beating around Matt Bush, I give you my first in a series of playoff previews. Let’s start with the crapshootiest crapshoot of them all – the Wild Card Games. Minnesota Twins: Ervin Santana has had a very Ervin Santana sort of season. Don’t walk many but give up too many home runs. Rock a fool’s gold ERA of 3.28 aided by unsustainably high strand rate and low BABIP. He’s been better on the road, but Yankee stadium is kind to few (especially those who give up 1.3 HR per nine innings). Better against righties unfortunately, as nearly every good Yankee bat is righty.

New York Yankees: Luis Severino has enjoyed a breakout year in 2017. The 23-year-old Dominican wunderkind should by all rights be a huge story, but he’s been a bit overshadowed by another young Bomber. Regardless, Luis has been unreal this year. And he’s saved his best for last, throwing 30 innings of 2.10 ERA baseball in September thanks to a .142 opponents average (!) and a 6.3:1 strikeout-to-walk ratio. Minnesota Twins: The Twins didn’t expect to be here. That’s probably the funniest thing about this game. They traded away two of their better pitchers at the deadline, consolidating their roster for 2018. But since none of the Angels, Rangers, Orioles, Rays, Blue Jays, or Mariners seemed to give two shits about this game, here the Twinkies are. And they’re without Brandon Kintzler, their default closer who is now setting up in Washington. Now the man at the back of the pen is Matt Belisle (who?), probably the 150th best relief pitcher in baseball (no seriously). The one boost they could get would be adding Jose Berrios as middle relief, who could be on call to put out a fire in the 3rd or 4th inning if needed. But he’s also incredibly streaky, so while he could throw 3 effective innings, he could just as easily walk the park.

New York Yankees: New York has one of the better bullpens in recent memory. The foundation of Chapman and (a somewhat compromised) Betances is a heck of a thing to build on. Then you add David Robertson and Tommy Kahnle, who are both closer-level relievers in their own right. Plus the quiet dominance of Chad Green, who is sporting a 13.6 K/9 rate as a Swiss Army Knife fireman. There truly is no weakness, save for the inherent weakness of humanity. And there is nothing left to chance, save for the butterfly-flapping unfairness of the universe. Best of luck.

Advantage: Yankees, by a country mile. Minnesota Twins: Minnesota returned slugger Miguel Sano to their lineup in time for a few tune-up games. It’s hard to say how much that will matter, though it surely can’t hurt to see some live Major League pitching. With Sano, the Twins have a strong lineup, albeit bereft of household names. They’ve got a lot of gap hitters, without nearly as much power as New York boasts. Given a typically stingy Severino start, Minny will have to string together base hits in order to hang some runs on the board. The Twins do have some speed, but will be limited by the rifle-armed Gary Sanchez (38% CS this year). Given the matchup of Yankee hitters and Twins pitcher, this lineup will need to put up 4-5 runs to even have a chance. And once you get to that bullpen, the pickings are slim.

New York Yankees: Well we all know about Aaron Judge. He’s good. So are Gary Sanchez and Didi Gregorius, and even Jacoby Ellsbury, lately. Heck, even Starlin Castro has managed a .301 average with 16 homers, truly proving the juiced ball theory. This is a powerful, patient lineup, without a lot of weaknesses. They do have a lot of swing-and-miss hitters, so Minnesota will be relying on Ervin Santana to rack up the Ks. But it’s the long-ball potential of this game that should be worrisome to Twins supporters – the combination of their starter and this Yanks lineup.

Well, that was easy. I’m honor-bound to mention here that every MLB game is crazy and life is unpredictable and Joe Mauer’s still got thunder in his lumber. But I’m a realist, and I can’t see this one going any other way. I actually think it will be closer early, with the Twins chasing a somewhat jumpy Severino by the 4th inning. But that Yankees squad will grind away, and eventually connect for a few dingers that will put the game out of reach. Colorado Rockies: Jon Gray might be the best starting pitcher in Colorado franchise history. I’m not joking (and neither is Jeff Sullivan). After going down in April with a fractured foot, Gray missed all of May and most of June working his way back. After a rocky July, he’s straight up balled over 11 starts in August and September. He features a heater with serious giddy-up (averaging 96 mph with it), a devastating slider, and mixes in some curves and changes. He’s had mixed results against Arizona this year, going 2-1 with a couple 10-strikeout appearances. He’s definitely below average for an ace, but he’s also a pitcher you don’t mind going into battle with.

Arizona Diamondbacks: Zack Greinke has atoned for his step backwards in 2016 in a huge way this season. He threw 202.1 innings of 3.20 ERA ball on his way to 17 wins. He sported a typically excellent 215:45 K:BB ratio and managed to induce lots of ground balls. He’s everything the D-backs could want in an ace, and they’ll be thrilled he’s pitching the Wild Card Game for them. He’s been stingy at home this year, posting a 0.96 WHIP in his Chase Field starts. He went 2-1 in five match-ups against Colorado in 2017, posting Quality Starts in all but one. He’s a bona fide hoss who has been absolutely nails in the postseason since 2013.

Advantage: Diamondbacks, by a length (that’s a horse racing term) Colorado Rockies: Greg Holland has had quite the bounce-back 2017 after his arm burst into flames while he was pitching with Kansas City in 2015. He saved 41 games, but did so with a shaky 3.61 ERA and an un-closer-like 1.15 WHIP. This is a gritty-ass, veteran bullpen, featuring the battle-worn Jake McGee, Pat Neshek, and Mike Dunn. Neshek is pitching like a suped-up version of his always fantastic self – frisbeeing wicked sliders from his Jennie Finch arm slot and harrumphing his sinker up there at like 12 MPH. Still, it works, as evidenced by his 1.59 ERA. Long story short, this is a good, but not great bullpen that faded as the year went on. The addition of Neshek helps, especially because the D-backs’ best hitters are righties, but it’s not a shut-down group.

Arizona Diamondbacks: Perhaps the most shocking thing about these Snakes winning 93 games is that Fernando Rodney is their closer. This dude has been a reliever – mostly a closer – his whole career, and has still managed a record of 44-63. If you know anything about how pitcher wins and losses are assigned, you know that it’s basically terrible for closers to have either sort of decision – wins or losses. It means he’s blowing games. Rodney is a righteous shooter of imaginary arrows, but that doesn’t make him a good pitcher. That said, Archie Bradley is a straight up menace, so Torey Lovullo (wait is that really their manager’s name?) would do well to ride Bradley as far as his beardy face will take ‘em. Beyond Bradley though, this group doesn’t inspire much confidence.

Advantage: Rockies, by an arrow’s breadth

Colorado Rockies: This team always carries a weird misconception. Regardless of how they have actually hit, folks assume they are rocking a sweet lineup, because they put up mad crazy stats. Well I’m here to shatter that reality: the Rockies have an okay lineup this year. It’s not bad, it’s just top-heavy. Charlie Blackmon and Nolan Arenado are two fantastic hitters, making the first inning against Colorado incredibly hard to escape unscathed. But beyond those two, their order features a bunch of slightly above-average hitters, and some downright bad ones. There is a ton of swing-and-miss, and not a lot of patience. They could easily score 8, or fail to scratch any across. A hard lineup to trust.

Arizona Diamondbacks: I hope Paul Goldschmidt wins MVP this year. Not just because I predicted it, but also because this guy deserves a lot more recognition than he’s gotten to date. Speaking of underrated hitters, Arizona’s deadline acquisition of J.D. Martinez has been nothing short of instrumental – he’s run a 1.116 OPS (170 OPS+) in 61 games as a D-back. Martinez protecting Goldschmidt is huge. But despite solid seasons from Jake Lamb, David Peralta, and A.J. Pollock, Arizona also has a bit of a top-heavy offensive attack. I’d argue they are deeper than the Rockies, if only by a bit. And I’ll take Goldschmidt over either Arenado or Blackmon. Plus, they get to hit at home.

I see a well-pitched game happening, with two teams who know each other very well operating with as much preparedness as is humanly possible. I think Arizona will ride Greinke deep, hoping to avoid relying on their bullpen if at all possible. I can see him getting through 5.2 gutty innings, giving up all three runs. There will definitely be a Diamondbacks home run by some random dude like Daniel Descalso, because that’s just how they seem to roll this year. Finally, look for a Goldschmidt steal of second in a big spot, highlighting both his Renaissance Man game as well as Jonathan Lucroy’s deteriorating catching abilities. Dodger fans should be fearful when the Snakes come to town.