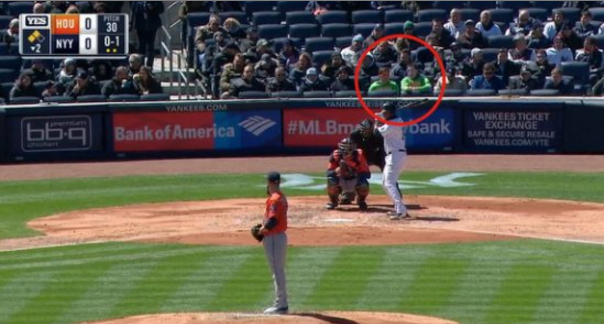 Due to a rain-out on Monday, the New York Yankees had to wait until Tuesday to get their season started against the Houston Astros. As players brushed off the rust to kick off the 162-game season, thanks to comedian John Oliver, that task proved marginally more difficult.

In his viral rant that called the Yankees “elitist a–h—-,” Oliver proposed a challenge to his viewers after buying two tickets behind home plate for each of the Yankees’ first three games. Using the hashtag #IHaveNeverSatInAPremiumLocation on Twitter, contestants were asked to list the ridiculous outfit(s) they would wear if chosen to occupy the front-row seats.

For the first game of the season, John Oliver and his crew selected two men who dressed as Teenage Mutant Ninja Turtles: The two turtles were in plain sight for the entire broadcast, and at least a minor distraction for any pitchers who took the mound. It proved to be especially true for Yankees reliever Dellin Betances, who gave up 2 walks, 3 earned runs and only lasted 0.2 innings in his first relief appearance of the season.

The Astros’ three runs in the 8th inning against Betances proved to be the difference, as they broke a 2-2 tie and went on to win the game 5-3.

New York will look to turn their fortune around tomorrow against the same Houston squad, but the real excitement will be the discovery of who won John Oliver’s next set of seats.

Only one thing is certain – Betances is hoping it’s not another set of ninja turtles.