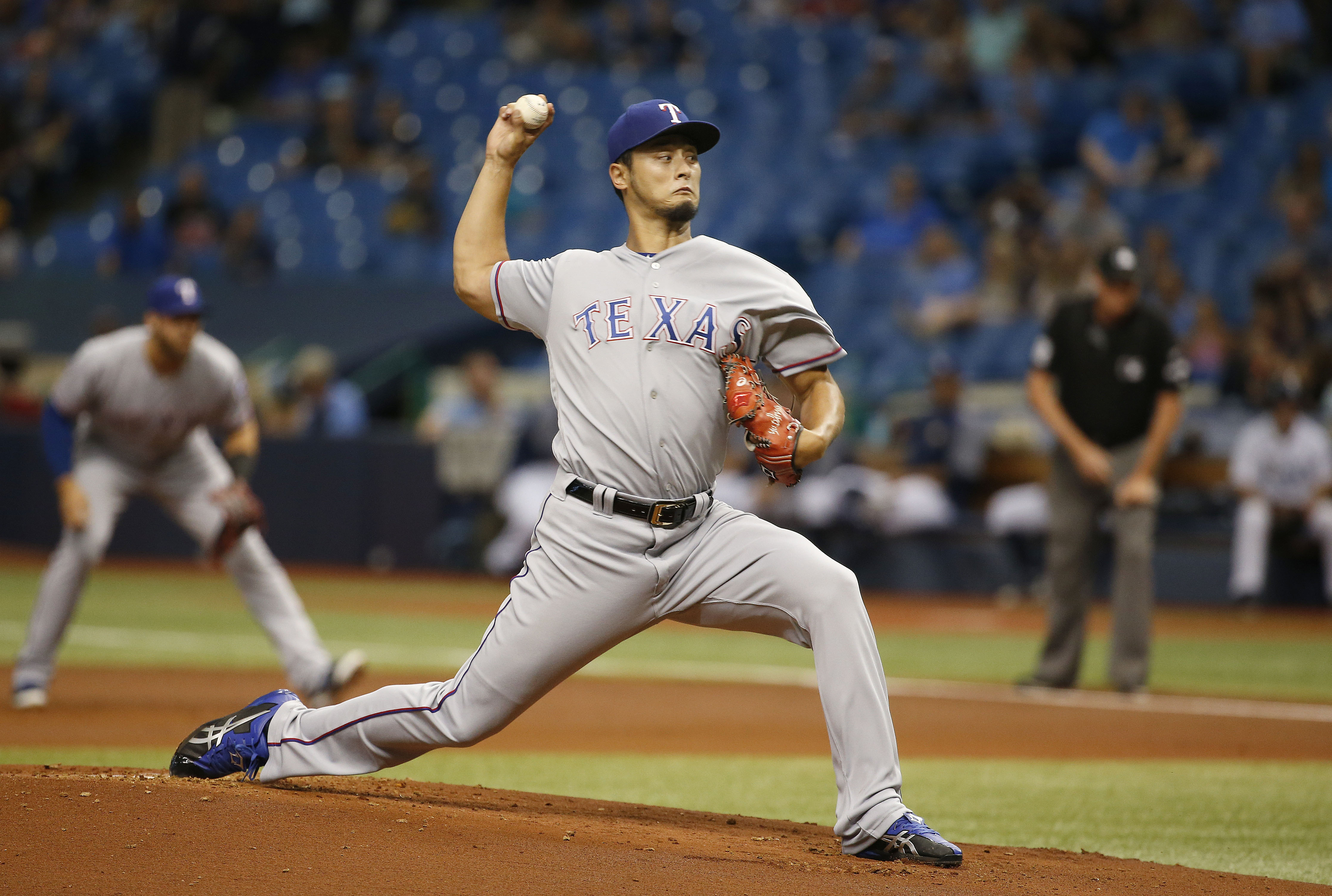 The presumed ‘big fish’ on the trading block — pitchers Yu Darvish and Sonny Gray — both got dealt to contending teams on what turned out to be a crazy July 31st MLB trade deadline day.

Aside from the headlining names, multiple clubs made smaller moves with the hopes to strengthen their potential postseason hopes. We’ll look at the winners and losers from Monday — as well as those squads who’ve gotten better prior to the final day of the deadline. With less than two hours before the 4:00 p.m. ET deadline, the Yankees made a big splash — acquiring 27-year-old SP Sonny Gray from the Oakland Athletics for three minor league players (Dustin Fowler, James Kaprielian, Jorge Mateo).  The addition of Gray gives New York a legitimate top-of-the-rotation starter to pair with Luis Severino, CC Sabathia, and Masahiro Tanaka. Even more significant, Gray is under contract through the 2019 season. The Yankees now have a young and talented piece to build around within their rotation.

GM Brian Cashman deserves a boatload of credit. Landing Gray was immense — both for the present and the future. He also landed fellow starter Jaime Garcia from Minnesota, and the former White Sox trio of Todd Frazier, David Robertson, and Tommy Kahnle. Frazier adds some pop to the lineup, Garcia is a versatile lefty with solid stuff, and the Robertson/Kahnle duo further fortifies what many perceive to be the best bullpen in baseball. Aside from Blake Rutherford, the Yankees didn’t relinquish any of its promising young core (including Clint Frazier and Gleyber Torres).

Without question, Cashman hit it out of the park when it came to improving the club’s prospects. The Yankees are a legitimate contender not only for an AL East crown, but also as a World Series threat.

Much like the Yankees, the Cubs enhanced their overall pitching depth for the stretch run. Jose Quintana made the move from the South Side to the North Side — landing with the Cubs as the centerpiece of the deal between the two Chicago teams. While the Cubbies did have to give up uber-talented prospect Eloy Jimenez, they control Quintana until 2020 at a shockingly-low price. The 28-year-old lefty had inked a 5-year/$26.5 million deal last year. In three starts since coming to the Cubs, Quintana is 2-1 with a 2.37 ERA.

Chicago also added to the back-end of its bullpen — snagging left-handed reliever Justin Wilson from the Detroit Tigers. Wilson has a 2.68 ERA this season, including 55 strikeouts in 40.3 innings pitched. He can act as both a set-up man and a closer for the Cubs (depending on the situation).  They also acquired catcher Alex Avila in the deal. Hitting .274 with 11 HRs this season, he offers the team depth as a pinch-hitter or as a platoon option with Willson Contreras.

In short, the Cubs essentially solidified themselves as the class of the NL Central. One thing is clear: The Dodgers are going for it.

The franchise hasn’t won the World Series since 1988. Four-straight NL West titles have resulted in early postseason exits. Currently in the midst of a historic season, this may be the Dodgers’ best shot at bringing Los Angeles its first championship in nearly 30 years. The traditionally-conservative front office waited until the very last minute to execute a trade for 4-time All-Star Yu Darvish, It was a brilliant move on a number of fronts — especially considering the Dodgers didn’t have to give up any of its top-three prospects.

Darvish instantly slots in as the No. 2 starter behind Clayton Kershaw. Though he’s been going through a rough month of July, heading to pitcher-friendly Dodger Stadium should help. Darvish has wicked stuff — and truly gives LA another dimension as it continues to charge towards the playoffs. In more of a minor move, the Dodgers traded for left-handed pitches Tony Watson and Tony Cingrani from the Pirates and Reds, respectively. Of the two, Watson figures to be more of an integral piece going forward.

As of July 31st, the Orioles sit at 50-54 — good for fourth-place in the AL East. It’s a far cry from last year, when Baltimore made the playoffs as a wild card team. The pitching staff has the second-worst ERA in all of baseball (5.15). Manny Machado is having an uncharacteristically bad season — hitting .243. While mathematically alive, it’s not very feasible to believe that Baltimore will make the playoffs this season.

As such, why not sell off some of its preexisting talent? There’s been mixed signals throughout the entire season as it pertains to leveraging assets. Trading for a 30-year-old rental in Jeremy Hellickson was extremely odd. Additionally, there was a ton of smoke surrounding star closer Zach Britton. With the value placed upon bullpen help, the Orioles could’ve flipped Britton for some much-needed farm system depth. Instead, Baltimore hung onto Britton (in addition to semi-valuable OF Seth Smith).

The massive elephant in the room is Machado’s status with the team. Due to be a free agent after next season, very few expect him to re-up with the franchise. By not dealing Machado — or at least exploring the possibility of a deal — his trade value will continue to decrease. Baltimore should’ve been heavily shopping Machado, Britton, Adam Jones, and even Kevin Gausman in order to hit the re-set button on what looks like a somewhat bleak future. Though the Astros lead the American League with a 68-36 records, there are some definite concerns within the make-up of the team. Lance McCullers — one of Houston’s best pitchers — recently went on the disabled list with back discomfort. He’s posted a 9.64 ERA in his last four starts. Ace Dallas Keuchel recently returned from a stint on the DL. In his first start back healthy, he lasted only three innings — giving up six hits and three earned runs on 79 pitches. He missed nearly two months with a pinched nerve in his neck, an injury that’s far from comforting.

With this in mind, many expected Houston to go out and grab a pitcher — whether it be a starter or a reliever. The team had been associated with the likes of Darvish, Gray, and Britton in recent weeks. Many had faith in the front office landing one of the aforementioned three. Instead, the ‘Stros traded with the Toronto Blue Jays for Francisco Liriano. The 33-year-old starter has a 6-5 record and a 5.88 ERA. Though a starter for much of his career, initial indications have Liriano pitching out of the bullpen for Houston.

This move isn’t an inspiring one — particularly for a ballclub hoping to reach the World Series. It looks even worse when considering what New York did. Couple that with the recent reemergence of the Cleveland Indians, and Houston suddenly doesn’t appear to be the big-time favorites in the American League anymore.

While the hated Yankees got considerably better, the Red Sox failed to address pitching concerns — particularly in the starting rotation. Landing Addison Reed from the Mets was a nice get. The right-handed reliever has a 2.57 ERA on the year to go along with 19 saves. However, Boston relinquished three of its top-30 prospects (all pitchers) in the deal. Is Reed really worth this much?

Outside of Chris Sale, Boston’s rotation is full of question marks. David Price landed yet again on the DL with elbow inflammation. No one exactly knows as to when he will be back (if at all). Former Cy Young winner Rick Porcello is 4-14 with a 4.55 ERA. Doug Fister certainly isn’t a long-term answer, and Eduardo Rodriguez is a talented — albeit inexperienced player. Beginning a playoff series with Sale, Drew Pomeranz, and Rodriguez wouldn’t exactly strike fear into the opposition.

Boston’s only hope is to have Price return fully healthy. Either that, or pray that Sale has a Madison Bumgarner-like run in him. As it currently stands, the Red Sox are 0.5 games behind the Yankees in the AL East.